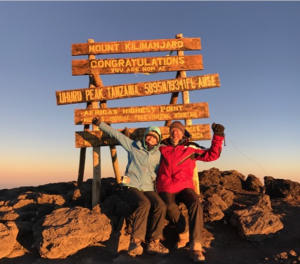 photo courtesy Molly Wheeler Wheeler and her dad celebrating after their eight day journey to the summit of Mount Kilimanjaro.

This summer, senior Molly Wheeler replaced her pool float with hiking boots to climb Mount Kilimanjaro on the Lemosho trail with her dad.

Mount Kilimanjaro is the tallest mountain in Africa and the highest free-standing mountain in the world with a height of 19,340 feet at its peak. Kilimanjaro takes hikers through five different ecosystems, varying from humid rainforests to arctic tundras that reach temperatures as low as negative five degrees.

“It is one of the hardest things I have ever done, but reaching the end was life changing. I think everyone should have the chance to experience that feeling,” said Wheeler.

The Wheeler family has a tradition where each child has the opportunity to choose a location in the world to visit the summer before their senior year of high school.

Wheeler’s two older sisters, Shannon and Rachel, previously traveled to Peru and Kenya, and this summer, it was Wheeler’s turn to pick a destination. 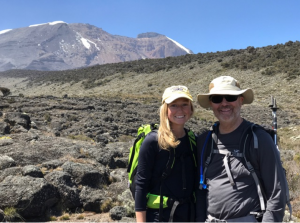 photo courtesy Molly Wheeler
Wheeler and her dad beginning their trek to the peak.

Like her older sisters, Wheeler knew that she wanted to go somewhere unique.

“I decided on Mount Kilimanjaro in Africa because it seemed different and I wanted to make sure I achieved a big goal,” said Wheeler.

“I really underestimated how hard it was going to be. It stretched me past what I knew as both my physical and mental limits,” said Wheeler.

As she continued her trek, Wheeler was forced to acclimate to drastic changes in the atmosphere.

“There was a time when it was so cold I told my guide I thought my toes were going to fall off. The nights were below freezing,” said Wheeler.

As the group reached the summit, the altitude thinned, the trail steepened, and people began to turn back.

“At one point, the trail became so steep we had to rock climb our way up. I remember constantly seeing people becoming sick on the sides of the trail, and I would just have to look away to avoid becoming sick and continue to press forward,” said Wheeler.

By the end of the hike, two of the 10 hikers in Wheeler’s group turned back.

Wheeler was stretched to her absolute limit on summit night. On average, the hikers would sleep 12 hours for a full day of hiking, but on the stretch to the summit, they went on two hours of sleep so they could hit the top of Mount Kilimanjaro by sunrise.

“I was so tired I felt like I wasn’t even conscious, but I remember thinking how beautiful the stars were. There wasn’t a centimeter of the sky without a star. It was incredible,” said Wheeler.

The stars in the sky and the light radiating from her headlamp were Wheeler’s only visibility as she made her way to the top.

“There were points when I didn’t think I could do it. There were times I told my guide I couldn’t go on. All I could see in the dark was a trail of headlamps, like an army of sorts. We were all on the same last stretch pushing forward together. I decided to keep pressing on,” said Wheeler.

On the morning of July 1, Wheeler reached the top of the highest free- standing mountain in the world.

“When I reached the top it was life changing, I don’t know if I can truly put that feeling into words. It was a beautiful view. I was looking down on the clouds,” said Wheeler.

“It is a feeling of achievement and accomplishment that I will carry with me forever. I will never forget it.”