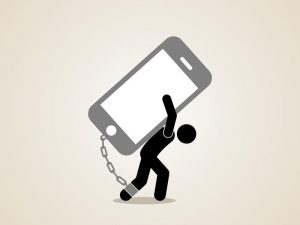 Do you ever fear being without your smartphone or not able to use it? Maybe you get anxious when responding to or receiving text messages, or you feel like you received a text or notification when you really didn’t?

If the above symptoms apply to you, you suffer from a condition known as cellphone addiction.

In the past decade, with the growing popularity of cellphones and smartphones, society has become inseparable from their electronic devices.

Recent studies have shown adolescents have started to develop an addiction to their cellphones.

Out of all of the cellphone users today, around 10-12 percent are estimated to have a true, physical addiction, according to Director of the Center for Internet and Technology Addiction David Greenfield.

So what really is cellphone addiction?

Greenfield compares it to a gambling or slot machine addiction.

“Every once in awhile you get a reward… a piece of information, a text, an email, an update… something comes through that you find salient or pleasurable,  but you don’t know when you’re going to get it, what it’s going to be, and how good it’s going to be,” said Greenfield.

People addicted to slot machines play the machines over and over, hoping they will eventually get a reward, money. This is very similar to people constantly checking their phones hoping for a notification to show up.

The more notifications they start to receive, the more the person becomes addicted to checking their phones, hoping to receive another notification.

If they do not have their cellphone with them or are unable to use it for some reason, they experience symptoms of withdrawal.

These symptoms can include increased stress, anxiety, and possibly feeling sick.

What really makes cellphones so addictive? Well, people are not necessarily addicted to their cellphones but moreso what the cellphone does.

Receiving these notifications provokes a release of a chemical called dopamine. Dopamine affects the pleasure center of the brain, making its owner feel good.

After dopamine is released, the brain creates an urge for more dopamine and therefore more of whatever was causing the release in the first place.

This is referred to as the Dopamine Cycle. Once one notification is received, the user will want to keep checking back for more.

Drugs such as marijuana, cocaine, and various opioids such as heroin and some painkillers also perpetuate the Dopamine Cycle, which is why they are so addictive.

Mathematics teacher Bryan Cole has begun to give attention to the issue with his students.

“It’s hard to ignore the pervasiveness of use – not just in school, but in most public places, too,” said Cole.

He has addressed the issue with some of his classes, showing one of them a Ted Talk about cell phone addiction.

“[Some people] cannot actively engage in the rawness of human conversation without responding to the click, ding, or buzz of a text, email, notification, etc. on their phone,” said Cole.

When asked if he had noticed any symptoms in his students, Cole said “absolutely.”

The most important thing Cole wants students to know about cellphone addiction is that it is a real and serious problem, not just a myth pushed by adults tired of younger generations constantly on their phones.

“In the end, as with other addictions, we must start with awareness,” said Cole. “It’s difficult to address a problem or condition you don’t know or think you have.”