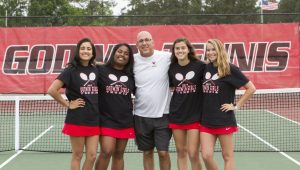 On May 3, Seidenberg reached new heights in his coaching career and for the Godwin girls’ tennis team by achieving his 400th win as the girls’ tennis coach.

The tennis team beat Cosby  High School 9-0, and with the last point of the game, Seidenberg’s win-count entered into the 400s.

With this recent achievement, Seidenberg needs 19 more victories to break the all-time record for wins by a girls tennis coach in VHSL history.

Seidenberg’s first season coaching tennis at Godwin was in 1994, and his first state championship came just a year later.

That championship in 1995 was the first of 11 state championships, and 18 appearances in states.

Seidenberg coaches tennis similarly to how he coached basketball.

“I like to have a set practice schedule, be organized with practices, move quickly from drill to drill, and applying disciplined. to each practice,” said Seidenberg.

Also, Seidenberg takes pride in his teams (both basketball and tennis) outworking their opponent.

“I always want to improve my player’s net game and inspire them to cheer each other on,” said Seidenberg.

Seidenberg does not solely credit his 400 wins to his coaching his abilities. Rather he credits his success to the many great players and coaches he has worked with over the years.

“Reaching this milestone means that I’ve had a lot of great players and fantastic assistant coaches throughout the years. It’s because of them I’ve had a successful career,” said Seidenberg.

One of his favorite parts of coaching is all of the relationships he has made with both former players and coaches.

He constantly works to build these same relationships within the team itself.

“I’ve tried to stress the importance of the team aspect of tennis. I want all my players to feel victorious when we win,” said Seidenberg.

Seidenberg stays in touch with all his former players and their endeavors after high school.

He also keeps in touch with past coaches, and enjoys seeing them get married, become parents, and celebrate other special events during their life.

“Seidenberg’s coaching style is one of the reasons why our team is so good. Although we couldn’t beat Deep Run in the end, we improved greatly during our season and had a great time,” said junior Sarah York.