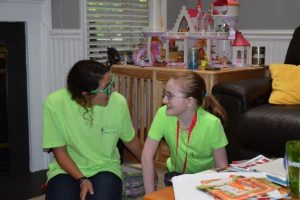 Mitochondrial disease is a rare genetic disorder that affects the lives of one in 4,000 people, causing poor growth, loss of muscle coordination, and organ failure.

For senior Isabella Ronson, however, it is a disease that affects the life of her friend, Claire Williams.

“The fundraiser is called Team Claire. It raises money for Mitoaction, a nonprofit that gives support to families with mitochondrial disease and mitochondrial research,” said Ronson.

Ronson and Williams have known each other since birth because their mothers roomed together in college.

However, when less and less people began showing up to the race due to the location, Ronson’s mother volunteered her to help out.

“I took over the fundraiser my sophomore year. I had no idea what to do. I didn’t know how to do anything, so I had to teach myself,” said Ronson.

Ronson runs the Team Claire Facebook page, has made a website, and has coordinated with Mitoaction to get a separate page for Williams so that 100 percent of all the donations can go directly to Mitoaction.

“I also make a t-shirt each year for Team Claire, and all the profits from the t-shirts go to Mitoaction,” said Ronson. 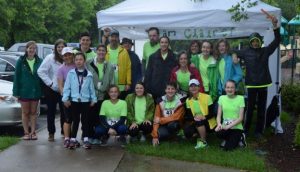 The actual event is held in Claire’s neighborhood at the Ashcreek 5K in Mechanicsville. Ronson helps put together a group of runners in support of Claire and mitochondrial disease research every year. This year, the event will be held on May 20.

“We bring out a team. We’re all in our T-shirts. Last year, it poured, but we had 40 runners who still came out, and we won the prize for the largest team,” said Ronson.

Along with the race, Ronson sets up a tent with information about mitochondrial disease, and brings cookies for runners.

“Claire started middle school this year, and she’s in a homeroom with other kids with disabilities and kids in the regular education track system who are their buddies. This year, we are going to reach out to them to see if they would like to come out and support,” said Ronson.

This will be Ronson’s third year running the fundraiser for Williams and Mitoaction.

“It has been really cool working for this fundraiser. When I first started doing this, I had no idea what I wanted to be when I grew up, and this has been an incredible learning experience. I had to learn how to talk to people, and get people excited,” said Ronson.

Due to Ronson’s work with Team Claire, Ronson is considering going into nonprofit work in the future. Ronson will be attending the University of New Hampshire next year in their business program.

Along with helping with the fundraiser, Ronson is now a personal care assistant for Williams, and will be working part-time over the summer for Williams and her family.

“I think it is important to be involved in something that you are passionate about that isn’t for you – that helps someone else. You also need to have a connection to it. I think it is so important to serve others, and enjoy it in the process,” said Ronson.