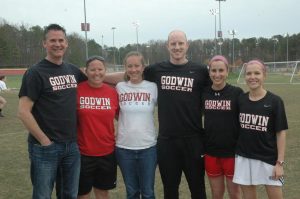 Being one of the best in the county, and with a legacy of traditions, the Godwin girls soccer team is staffed completely of past student athletes.

Head coach and Health and Physical Education teacher Ali Toole was a player and graduate of Godwin in 1997. Toole went to the University of Maryland to play as goalkeeper for the soccer team.

The team has been coached by Godwin teachers for the past 27 years. Geometry teacher Rob White coached from 1991 to 2008, and calculus teacher Miranda Watson coached from 2004 to 2015.

With a history of players who continued playing in college, Godwin soccer is known to be a competitive team.

Winning a state championship during the past season of 2016, the team is expected to be a big competitor for this year’s title.

Toole’s coaching strategies have helped the team greatly. Some of her advice to the team includes telling the girls not to complain and instead compliment others.

“We have continued with team building exercises such as circle talk. And as a coach, I remind myself of what Coach White always said about coaching is that we do this to create positive memories that will last a lifetime,” said Toole.

Many graduated players have stayed involved in the program including Lauren Abraham, a past player on the Godwin state runner-up team of 2009 and player at Washington and Lee. She is now an assistant coach to Toole.

“Lauren brought a youthful side of the game back since she just graduated from W&L and played for four years. She connected our past programs to this program,” said Toole.

“She brought many alumni out to practice for games when they were back in town visiting their families. This allowed our players to take more pride in our entire program. This also ignited many alumni’s pride in our season’s success.”

2012 graduate Jessie Ashworth and Chris Thornton, 2001 graduate, have helped with the team.

Ashworth said, “I had excellent coaches and teammates who helped tremendously with my development as an athlete. I have always been very grateful for that and hope to help create a similarly positive experience for current players.”

The history of the program has included many traditions, some secret, some not.

The toe-tapping tradition, for instance, is when the team members line up before a game during the national anthem and tap their foot to the person in front of them and pass it back and forth before every game.

“This team is definitely goofy, much like some of my teams that I played on in the past. They joke around with each other a lot and there’s always lots of laughter,” said Abraham.

“This group plays their best soccer when they keep things light and fun.”