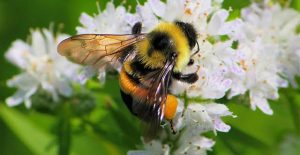 As spring weather arrives, bees are making their presence more obvious. However, they may not be as “present” in the United States as they were compared to the late 1990s.

On Sept. 30, 2016, the U.S. Fish & Wildlife Service established that certain species of bees are on the Endangered Species List, the first time this has ever occurred in the United States. One of those species, which is common in Va., is the Rusty Patched Bumble Bee.

The species would commonly be seen in roughly 28 states around the nation, including two provinces in Canada, but today, they are only present in 13 states, Va. included.

Bumble bees are among the most important when it comes to pollination, as they are the sole pollinators of tomatoes, as well as other products we eat on a daily basis.

Bees account for about $3 billion per year in pollination services, according to the FWS. They also help create seeds that benefit the nourishment of wildlife, such as birds and bears.

As humans, many of the foods we eat will be affected critically should bees go extinct – such as onions, cucumbers, avocados, and apples.

Because humans rely on pollination for food, experts are concerned about the trend in terms of worldwide food supply.

Approximately 75 percent of the worldwide food supply relies on some form of pollination, which is sparking the concern.

There are many senses of why this has been a recent trend, and climate change is a major factor.

Because of warmer temperatures and higher amounts of precipitation, many factors affect the insect, such as less blooming plants, late appearance during the season, and destruction of trees.

Pesticides also impose a major conflict, as bees can absorb the toxic chemicals through their body, having fatal effects. Disease is also another factor, as parasites may affect their life cycle.

To aid with the ongoing concern, there are numerous ways people can help out the bee population.

Going organic with certain foods can help bees by decreasing the amount of pesticides in the air. Also, buying food from a local farmer’s market makes a beneficial impact, as local farmers do not tend to use many pesticides.

One way of helping, however, may not be as easy to some: beekeeping.

Many cities across the nation have lifted their previous bans on beekeeping, such as New York, Seattle, Chicago, and more. Many residents in these cities are beekeeping on their own rooftops, creating a new home for the bees.

In the Richmond area, as beekeeping may not be as common, communities of beekeepers gather together to discuss issues about the conflict.

Gardening is also a great solution, as it provides a new, yet familiar environment for bees to live and pollinate. Planting shrubs or bushes are the best way to provide a home for them.

Overall, without helping the bee population, food prices are expected to continue rising in the near future. The life cycle of bees are expected to disappear, as the destruction of nature only acts as its motivation.