The 2017 Eagle Expression Anuual Art Show was hosted March 16th in the library. It was open to all Godwin students and staff, as well as friends and family members. The show had a nice turn out with teachers, students, and parents alike, all enjoying and discussing student artwork.

They had light refreshments, people giving henna tattoos, and live music. The atmosphere was lively and inviting for all ages and the event incorporated the art and activities to create a night of celebration for artists and attendees.

Below is a list of standouts and favorites from the show: 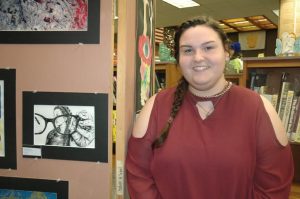 Her piece in this year’s Eagle Expressions ar 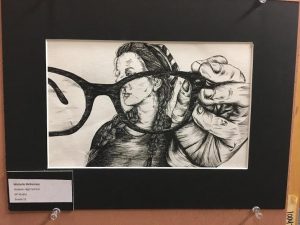 t show is a Micro Pen portrait. it took her about one to two hours to complete

“This is one of my strongest pieces, really. I’m really into portraiture, and pen is probably my strongest medium that I use, so I tend to lean towards that,” said McKenney when asked why she chose her piece for
the show 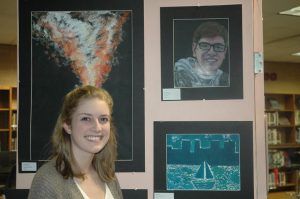 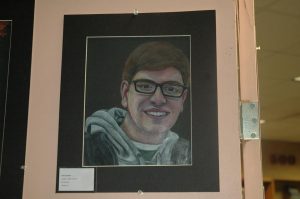 Kelly Baxter created a portrait of Godwin senior Dalton Smoot. When asked wy she thought of the art program, she said, “I really like it, the AP class is really fun, we get to do a project a week. Even though that’s really hard, it’s so fun.” 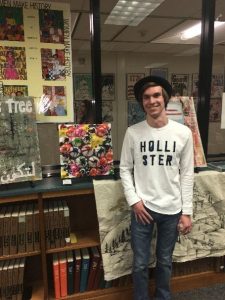 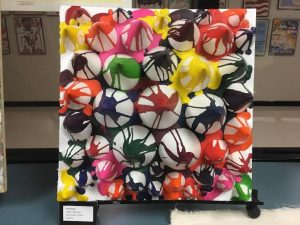 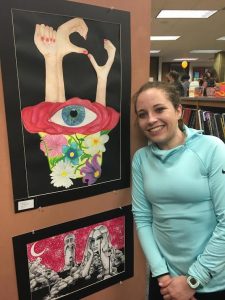 Brynn Backer created a colored pencil drawing of a flower pot with three arms coming out of the top, all surrounding a laarge eye in the center. It is arranged to resemble a Hamsa, which is a Jewish Symbol. When asked about its meaning, Backer explained her story of how as a baby, the Hamsa symbol become a good luck shape or her when she brought it with her for luck before recieving a liver translant. 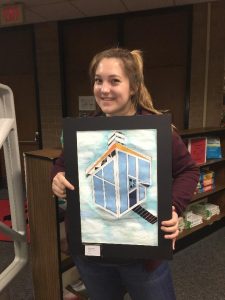 A Godwin Artist, junior Aftoen Richmond, has a drawing and painting in the art show. She made a house in the sky, surrounded by clouds.

When asked what mediums she used, she said, “[I used] watercolor, and then acrylic, and then there’s sharpie going on, and then hot glue,” said Richmond about the process for creating her .” 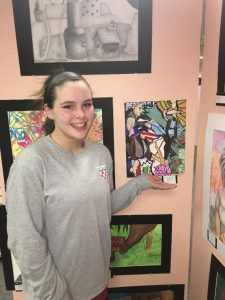 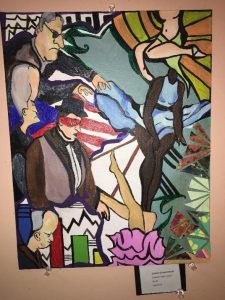 Lindsey Schwartzkopf, an Art III student, created a painting to be in this years Eagle Expression art show.

This piece took Schwartzkopf about five class periods to create this period.

Her piece has some political meaning, she said “it’s about the government and primarily old white men ruling the government, pointing to women. I, it’s kind of about planned parenthood and abortion and saying that women can make their own decisions, and they don’t have to let the government control them,”said Schwartzkopf..” 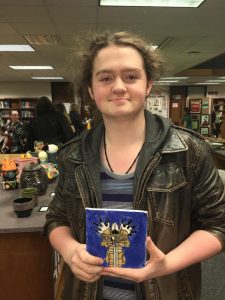 Ripken Gratton is a ceramics II student that put his tile art in this years Eagle Expression art show.

He made this tile with a depiction of a character from his favorite game, Diablo. Describing the process of making this in said “Basically I took about a pound and a half of clay, put it through a slab roller, then took a piece of tracing paper and I took one of my designs that I used from an old sketchbook, and then i traced it on a piece of styrofoam, which I then put the slab on top of and rolled it back through and it came out with a design that comes out like this-” (shows ceramic) So with that I basically wait for it to go bone dry then we fired it, then we started glazing.”

It took Gratton about a month to make this one tile and plans to make four others to complete the set.