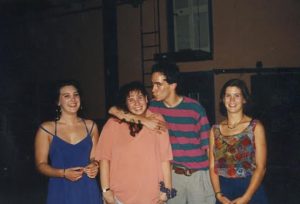 The Dave Matthews Band has been selling out venues around the world since their formation in Charlottesville, VA in 1991.

Seventeen years later, fans from far and wide still grovel for coveted tickets and are awe-struck in the presence of the Grammy-winning ensemble; at least, most fans are.

Godwin Assistant Principal Mindy Guyer is the exception in the Dave Matthews Band fan base.

Guyer met the three original members of the band, Dave Matthews, Boyd Tinsley, and Peter Griesar, in 1992 by chance when they opened up for one of her favorite bands, The Connells.

“I became a quick fan and hired them to play for my high school graduation party that year,” said Guyer.

After seeing the band play multiple times over that summer, Guyer and the members of the emerging ensemble became friends.

“Since I was with them all the time, I had become ‘part of the family’ and they figured it just made sense,” said Guyer.

Guyer spent that summer doing office tasks such as creating the fan database and taking care of their travel arrangements.

The job allowed Guyer to attend part of the band’s 1992 European tour while she was studying abroad in Paris.

“The thing about being with them in Europe was the juxtaposition that the experiences offered,” said Guyer.

“It was just a nice break from my cheap and modest travels to be next to something so big.”

“So big” verges on an understatement of the band’s success.

While in France, Guyer and the band attended a festival called Les Eurockeenes, one of the largest rock music events in the country.

“I got to meet Robert Plant and Jimmy Page, Sheryl Crow, Jeff Buckley, and a bunch of other famous people.  I just couldn’t get over how big the band had become that they were playing with these folks I had heard about for years,” said Guyer.

The experience not only put Guyer in close proximity to hugely successful musicians, but also opened her eyes to the bond people separated by language barriers can find in music.

“Music is universal.  People come together, stand side-by-side, dance and interact as if they are long-time friends.  Being in an international group and not noticing the difference is awesome,” said Guyer.

Looking back, Guyer appreciates the stroke of luck that briefly brought her into the music industry.

For students who have an interest in participating in the music industry, Guyer recommends that they be real and patient with their goals.

Being patient and genuine throughout Guyer’s relationship with the band resulted in an amazing and memorable experience.

“Honestly, it has to do with timing. I was just in the right place at the right time and met some people who ended up being famous. I had no idea when I first saw them where things would go,” said Guyer.