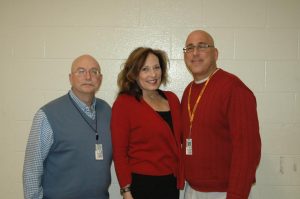 The sound of the police officer on the radio echoes through the walkie talkies, the ambulance’s siren blares through the streets, and hearts beat rapidly. Two members of Godwin’s staff both have worked as concert security and have had some memorable experiences while doing so. These “yellow shirt,” a title based on the yellow shirts they wear when volunteering, teachers are English teacher and department head Chip Carter and Psychology teacher Mark Seidenberg.

Carter first started working at concerts when he was a young teacher down in Norfolk after being introduced to the opportunity through a friend of a friend. He served as an usher, a ticket taker, a security guard, and a vender of t-shirts. He has attended many concerts as a volunteer, and a few of his favorites include Paul McCartney, Bruce Springsteen, and Prince. Not only did he work at concerts, but he worked at sports games, comedy shows, musicals, circuses, pro wrestling matches, and monster truck shows, among others.

Due to his work, he was allowed to attend many events for free and was paid a percentage of t-shirt sales. At a basketball event, Carter let a young player into the arena with a friend of his who was playing. That young player’s name was Michael Jordan.

According to Carter, one of the scariest things that happened while on the job was when he was sitting outside of the arena grading papers. 25-year old Carter was sitting 10 feet away from a second ticket booth that was not being used at the time, guarding a security entrance.

All of a sudden, Carter saw a body falling out of the corner of his eye and watched it hit the ticket booth, shattering glass everywhere. The body almost fell head first onto the concrete ground, and he recalls immediately running to get the police, who then called an ambulance. As it turns out, it was an intoxicated man who had climbed up 30 to 40 feet in the air and sat in a gap between the spotlights. Luckily, the man was not killed by the fall.

“I was talking to another security guard about what had just happened and he had told me that the last time this had happened it was about eight to 10 years ago. An intoxicated teenage girl fell from the same gap and hit the ground head first. Unfortunately, she passed away as soon as she hit the ground,” said Carter.

Her parents sued and received a settlement due to the lack of security stopping the girl from climbing up that high.

Overall, Carter enjoyed working at many concerts and getting to see various artists for free.

Seidenberg volunteered as concert security five to 10 years ago and attended three concerts for free during this time.

He first found out about the job when he talked to someone he knew who was high up the in RMC, an event staffing company, and told him that he wanted to see the Rolling Stones but that the tickets were too expensive. The friend told Seidenberg that he should volunteer for the concerts and see them for free.

He worked as a security guard for three concerts and got to pick which ones to volunteer at. He worked security at the Rolling Stones concert, the Bruce Springsteen concert, and the Elton John concert.