Houston we have a problem- by Sports Editor Dalia Jimenez 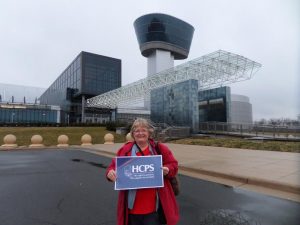 Interests and hobbies come in all shapes and sizes. For government and science teacher Jennifer Andrews, her interest comes in the size of a meteor.

Andrews is well-known among the staff and student body for her love of astronomical science and space exploration. She is constantly in search of opportunities to continue learning about the solar system and what lies beyond.

“The universe is so immense and far distant. I marvel at our ability to learn about other bodies in space, despite the distance,” said Andrews.

Andrews grew up during the Space Race period and became fascinated with space related science. Her father was in the Navy and was boarded on the ship sent to retrieve Gemini 8, the spacecraft that carried astronauts Neil Armstrong and David Scott. The mission was cut short due to technical difficulties, but Andrews remembers the excitement surrounding the many space exploration events in her childhood.

“I lived in Virginia Beach, and the dome where I went roller skating as an elementary student was named the Alan B. Shepard Convention Center – you don’t forget Shepard if you live in Virginia Beach, even though John Glenn was the first American astronaut to orbit the Earth,” said Andrews.

When Andrews began teaching Earth Science, she was able to rekindle her interest in astronomy and space exploration through the curriculum she taught every day. 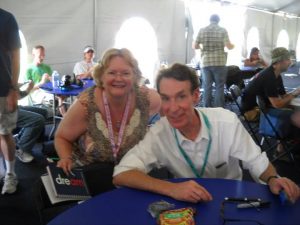 “My interest in space ramped up when I got this job teaching Earth Science. Astronomy and space exploration are a part of that class, so as the students learned about those topics, my memory was refreshed, and I realized how fortunate I am to have grown up when many space exploration events happened,” said Andrews.

In 2011, she attended the NASA Tweetup at Kennedy Space Center to watch Juno, a space probe, launch to explore Jupiter, and went to NASA Langley to watch the Orion Drop test. Drop tests are a series of tests studying the impact astronauts may experience after landing in the Pacific Ocean after deep space missions.

Throughout her life, Andrews has met many scientists and astronauts, as well as space enthusiasts like herself. She remembers her trip to Kennedy Space Center with fondness.

“I was amazed by enthusiasm of the attendees. Here were people who paid attention to NASA, were interested in space, and wanted to learn more. None of us knew each other before the event, but we remain good friends to this day,” said Andrews.

After the 2011 event, Andrews followed NASA closely on social media to apply for many other space events and socials. Because of her diligence, she was able to attend a special event that combined science with an overwhelmingly popular sporting event. 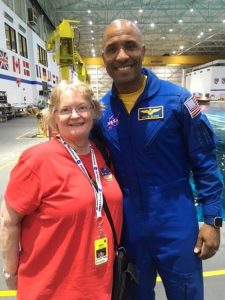 photo courtesy Jennifer Andrews           Andrews had the opportunity to meet astronaut Vic Glover at the Spacebowl at the NASA Johnson and Space Center.

Recently, Andrews had the opportunity to spend four days in Houston, Texas touring Space Center Houston and NASA Johnson for the #SpaceBowl.

She was also able to have lunch with astronaut Clay Anderson and speak with Leland Melvin, the only astronaut to be drafted by the NFL. She was also a part of a Q&A with two American astronauts currently on the International Space Station, Peggy Whitson and Shane Kimbrough.

Since her interest in astronomy has grown, she has attended a total of four NASA socials and one at Udvar Hazy, the Smithsonian National Air and Space Museum annex at Washington Dulles International Airport in Fairfax County.

Because of her love of space exploration, Andrews also wants to raise awareness to the lack of space funding in the present day. She believes that if more people become interested in astronomy in their earlier years, there will be more cause to expand our knowledge of the universe.

“When Congress failed to pass a budget several years ago, and nonessential federal employees were furloughed, the space tweet community posted #ThingsNASAwouldsay on Twitter. Those in the community feel it’s our responsibility to spread the word about the need for continued space exploration and funding. Just because the shuttle fleet is retired does not mean that NASA is out of business,” said Andrews.