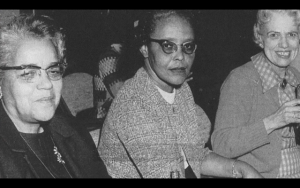 The award-winning film “Hidden Figures” features the untold story of Dorothy Vaughan, Katherine Johnson, and Mary Jackson, three African-American mathematicians who worked at NASA starting in the 1940s and crossed both gender and race barriers.

These women went on to lead the operation of one of the most significant achievements in history, the launch of John Glenn into orbit.

The movie was released in Dec. 2016 and is based on the non-fiction book, also named “Hidden Figures,” by Margot Lee Shetterly.

As a 2017 Oscar nominee for Best Picture, “Hidden Figures” captured the hearts of many, telling the story of how these women were able to be successful despite the harsh racism and sexism during the time.

In addition to making an impact globally, the movie has gained local attention due to recent Athletic Hall of Fame inductee and 1989 Godwin graduate Ryan Heathcock being the grandson of Dorothy Vaughan.

Vaughan was the lead of the division in which African-American women performed mathematical calculations to support space and flight trajectory for rockets in development.

The agency identified Vaughan as a mathematical genius in her secondary education. She finished both high school and college early and began teaching math at age 19.

Although the film is based on her, Vaughan passed away in 2008 and did not get to witness the making of the movie. However, her family had the opportunity to be part of this special journey.

Regarding the movie, Heathcock said, “It was a moment of pride that, in my view, was a long time coming.”

Heathcock said that many African Americans who have made amazing contributions to society have been excluded from history lessons.

“It becomes a bitter sweet victory to have her story told after her passing,” he said.

Heathcock is happy to share Vaughan’s story as his story, and it lives on through his profession as an oral history video documentarian. He records the family history and traditions of those who have made significant contributions like his grandmother.

“Grandma Vaughan happened to be a math genius who worked for NASA, but that does not mean your grandmother who may have been a stay-at-home mom was any less impactful,” he said.

Heathcock imagines his grandmother would say her most significant reward was raising all of her children and seeing them go to college and earn degrees of their own, knowing her legacy will live on.

The family has always been proud of Vaughan’s accomplishments, but is now also proud to have the recognition of the world.

“As her family, we live our lives as a reflection of the standard she established so many years ago,” Heathcock said.

Heathcock believes that his grandmother’s accomplishments were even greater because she was a black woman working in a white man’s world during the Jim Crow era.

He said, “You have to understand that living in this society, for African Americans in general, can be painful and harsh when it comes to living, achieving, and excelling against odds that are clearly stacked against you.”