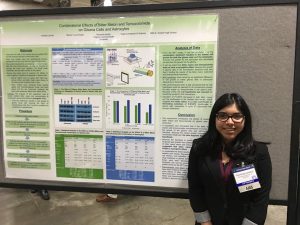 Zaman, a student in Godwin’s Center for Medical Sciences program, began her cancer research in eighth grade while attending Moody Middle School. Her experiment was titled “The Effect of Different Tea Extracts on Growth of Glioma Cells”.

Since then, Zaman has expanded upon her research, presenting her work at Metro Richmond Science Fair (MRSF) held in the Central Richmond area, and Virginia Junior Academy of Science (VJAS) held at VCU.

“The project that I won for last year is titled ‘Combinatorial Effects of Bitter Melon and Temozolomide on Glioma cells and Astrocytes’. Glioma cells are derived from Astrocytes and they make up the brain tumor Glioblastoma, the most common and deadliest brain tumor,” said Zaman.

Zaman noticed during research that bitter melon was used in numerous Asian diets, and she found that it had a lot of anti-cancer properties. Zaman realized that if she were to combine bitter melon with Temozolomide, the leading therapeutic drug for the treatment of Glioblastoma, then she could reduce the negative symptoms of chemotherapy and cause a negative effect on cancer cells while decreasing harm of noncancerous cells.

“I became interested in bitter melon through this article that talked about the health benefits of bitter melon. I had seen in the past that natural agents such as plants and vegetables could affect cancer in a negative way. I wanted to see if bitter melon would do the same,” said Zaman.

Zaman’s research with bitter melon and Temozolomide resulted in her receiving the first place award in her subcategory, “Health and Medicine B”, and her winning the Cancer Research award for her “outstanding science papers related to cancer research”, The Ertle Thompson Memorial Endowment Award, and Grand Prize at VJAS.

Due to her winnings, Zaman was invited to attend the 2017 American Junior Academy of Science meeting (AJAS). The meeting took place at Massachusetts Institute of Technology (MIT) in Boston from Feb.15 to 19 where she was given the opportunity to present her research and paper in front of other junior scientists.

“I mostly met other students who did a lot of science fairs and were recognized or nominated from their states. There were other professional scientists, as well. There was one event called ‘The Breakfast with Scientists’ where I got to meet specialists in engineering, cancer research, genetics, and other fields of science,” said Zaman.

Zaman was able to listen to other scientists her age and view their projects, and she found it interesting that many of the projects involved new biotech technology such a recombinant DNA and RNA interference, and cancer research such as nanoparticles that reduce tumor growth.

Along with listening to projects, she was able to meet with neuroscience and bioengineering researcher Feng Zhang.

“One of the people I got to meet was Feng Zhang, who pioneered CRISPR-Cas9, a very recent type of biotechnology that involves gene-editing. The fact that I got to meet him, a man who was so influential in the field of science, was so cool to me,” said Zaman.

This year, Zaman has expanded upon her project for the 2017 VJAS fair. Rather than looking at the effect bitter melon and Temozolomide has on cell growth, her research has focused on cell death and the internal mechanisms of cancer cells.

“For my project to be expanded into real life tests, it would be a far, down-the-road type process because that is the nature of these cancer research projects,” said Zaman.

Zaman is interested in studying biotech and biochemistry to expand her knowledge on lab research that will help in the discovery of methods that might be able to help cancer research and potentially the effect of other diseases.

“I find cancer research interesting because it is a current field of research where new things are being discovered every day. The way that cancer research and biology is going in terms of research is fascinating. It was cool to see a lot of integrated fields of science together,” said Zaman.