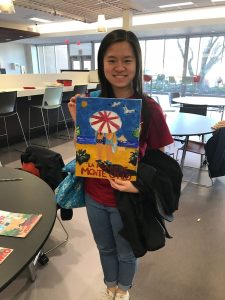 On Saturday March 11, hundreds of students from all over Virginia attended the Congrès Français, an event to promote student immersion in French culture. Students all the way from Lynchburg to Richmond attended the event.

One student from Godwin, senior Jenny Ding, participated in the French immersion experience.

Ding said, “I loved the event. It was a lot of fun, and the food was really delicious. I met lots of new people and made many new friends who share my love of French.”

The theme this year was “Nous sommes tous artistes!”, translating as “We are all artists!”.

Nineteen years ago, French teachers from Chesterfield County began the program in hopes of bringing a new life to French education.

This was the first year that Godwin attended, led by French teachers Kayla Soltis-Katella and Laura Rhoades.

Open to all French students in Virginia, Congrès begins with over 15 different level-based competitions.

Students can choose a category to compete in, ranging from production of a short French skit, Francophone costume creation, French Idol, trivia competition, and others.

Ding participated in the art reproduction and had one hour to copy a French painting, for which she chose a travel poster.

Students were then invited to a short VCU sponsored French film festival while Le Marché International was being set up.  At this market, students trade tickets for traditional French food and products at school sponsored stands.

“There was a ‘matisserie’ booth – like a French pâtisserie serving pastries, but selling Matisse themed cookies!” said Rhoades.

“It was wonderful to see so many students speaking French and the amazing things that they were able to come up with,” said Soltis-Katella.

Participants also had an opportunity to attend multiple workshops, including crêpe making, a showcase of Moroccan culture, and pointillism.

“In the afternoon, I took two workshops. The first workshop taught me how to sew sabots, tiny little shoes made out of fabric that holds treats and candies for children during Christmas. The second workshop was about French fashion. I … designed a dress made out of newspaper,” said Ding.

Competition activities and market stands were judged based on fluency, creativity, enthusiasm, and accuracy.

All student creations were showcased throughout the day. Those participating in the French Idol performed their favorite French song at the award ceremony. Students in the fashion workshop presented their creations down a red carpet.

Soltis-Katella said, “Events like Congrès make learning French much more real because you get to see it out of the classroom and you get to have all of these different experiences while using something you’re learning in school.”

Godwin will be taking a larger delegation to Congrès again next year which is open to all French students.