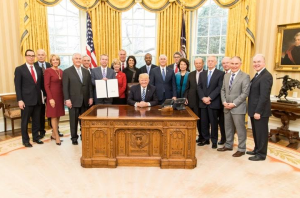 Recently, when the photo of President Trump’s cabinet meeting was released, I was taken aback.

How can there be 16 white people and only two people of color?

But of course, this is the way it has always been. When you stick with tradition, nothing can go wrong…

Except, of course, the fundamental racism and sexism that has been ingrained into our society since this country was founded and the bitterness pushed upon people of color and the reward one receives for being white.

There is an innate privilege that goes hand-in-hand with being a white person in America.

I am a white person; therefore, I have privilege due to the color of my skin. And I am not afraid to make that statement, acknowledge it, and influence a change in the system.

Journalist Christine Emba said, “[White privilege is] the level of societal advantage that comes with being seen as the norm in America, automatically conferred irrespective of wealth, gender or other factors. It makes life smoother, but it’s something you would barely notice unless it were suddenly taken away — or unless it had never applied to you in the first place.”

Many people will attack this sentiment, fighting back with “not ALL white people are affluent/able-bodied/privileged,” but this argument is misconstruing the entire point of recognizing white privilege.

It is a tough concept because there is an inner battle of whether this could possibly be true, because you may be reading this thinking, “Who does she think she is? Calling ME racist? Saying I think I am better than people of color?”

That is not the argument I am making, although it is the argument that is most often used when fighting against white privilege, stating that this concept doesn’t align with you considering you would never put yourself above anyone.

But as a white person, you are looked at differently simply due to the color of your skin. It is unfair, it shouldn’t be happening, but it is.

The concept goes beyond being wealthy, white, and living in a nice neighborhood with neighbors who treat you with respect (although this can be a factor of white privilege), but rather it is the sense that, as someone who is white, you will have the upper hand.

To put this privilege into basic terms, imagine walking into a drugstore to pick up Band-Aids and shampoo. As a white person, the Band-Aids are going to match your skin tone and the shampoo that is most prevalent is the one that will match your hair type.

In this same scenario, you are walking around the store alone. As a white person, you are usually not followed, watched, or questioned simply because you are in a store. But this questioning happens to people of color every day, from being stopped by a store worker to having a police officer pulling someone over.

Is there a way to work through having this privilege?

White privilege is ingrained into society. It is not a change that can flutter away quickly, but the main thing to begin with is to recognize your privilege.

Recognizing your privilege is understanding this is something that white people will carry with them throughout their lives, and it is not something that can be ignored.

From there, we must take action. If people understand and accept that there is a real problem with how we are being treated in regards to the treatment of others, we can use a group mentality to rise above, band together with people of color, and take action.

Working to have white privilege recognized and worked against encourages the dismantling of rigid societal implications in regards to race.

This call to recognize privilege allows for the first steps. Agreeing that privilege is prevalent will not create a change in the structural racism of our views, but it provides a start- to be aware, to notice what is happening around you, and, if you fully understand this, to begin to implement change.