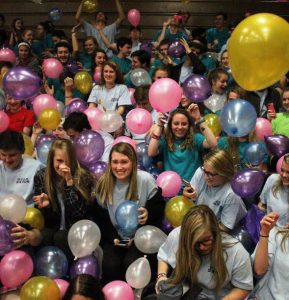 Each organization has a special connection to the Godwin community.

In the past, the money raised for Game Night all went to Cystic Fibrosis and the Eagle Family Fund, but this year they decided to include more organizations to increase participation.

Principles of Leadership teacher Rebecca Martino said, “We were hoping that with more organizations to support it would give more students at Godwin a reason to participate in Game Night. Additionally, we want to make a difference at Godwin by making it an even better place.  All of the organizations we chose have positively impacted current or former students in some way.”

“Students learn and develop leadership skills such as communication and goal-setting, then put these skills into practice through the planning and implementation of school events including the Veterans’ Day Assembly and Game Night. We do fun, hands-on activities like team-building exercises in class, but there are homework assignments, quizzes, and tests like other classes, too,” said Martino.

Game Night was promoted throughout the year by the Leadership class, who arranged fundraisers for the charity organizations and the event itself.

The students sold t-shirts for a tie-dye themed basketball game against deep run earlier in the year and sold wristbands that allowed students to wear pajamas on Feb. 1.

In past years, it cost $100 to attend Game Night, but to get more people to participate, it was lowered to $70.

Registration started in February with a $20 deposit. Students then had until the week before Game Night to raise the other $50 to attend, although they were welcome to raise more.

The day of Game Night, Leadership students set up decorations, tables, and blew up balloons from 11 a.m. to the beginning of the event.

The auditorium housed a game of Family Feud that the junior class won.

“Family Feud was my favorite part of the night. My friends and I had such a blast playing against the other grade levels and were so excited when we won,” said junior, and Family Feud winner, Kaylee Butterworth.

In the commons there were poker tables, horse racing, roulette, Texas Hold ‘Em, and board games set up for students to play and gain tickets to put into the raffle drawings. The NCAA March Madness tournament was also being projected on a wall in the commons for students to watch.

In the faculty lunch room, food was set up from a variety of restaurants like Mellow Mushroom, Bottoms Up, McAlister’s, Papa John’s, Potbelly, Matchbox, Chuy’s, Chianti, Qdoba, Zoe’s Kitchen, and many more.

In the gym, there were inflatables from Astro Jump Party rentals, which included an obstacle course, a jousting arena, and a life-sized Hungry Hippos and foosball game. A large section in the front of the gym was occupied with rows of cornhole.

Ping Pong tables were set up in the hallways while a dodgeball tournament took place in the small gym.

A FIFA Tournament was also set up in one of the gym classrooms where students could compete against their classmates on the X-Box to see who was the better gamer.

Throughout the night, the winners of any of the games won raffle tickets which were placed into multiple raffle drawings for different prizes.

Some large prizes included, Beats headphones, a TV, a 6-month gym membership to Courtside West, and a shopping party at Vineyard Vines.

“I’m so glad I got to raise money for so many amazing charities! It was just a bonus to win a gym membership. It should help me a ton this track season,” said sophomore Dalia Jiminez, winner of the Courtside West gym membership.

All of the organizations were grateful for the donations.

The Eagle Family Fund was among the recipients.

Game Night would not have happened without the parent and teacher volunteers who ran everything from check-in to handing out raffle tickets.

“Without parent and teacher volunteers, Game Night would not have been nearly the success that it was!  They worked the prize table, registration, served and replenished food from cotton candy and Sno-Cones to pizza, dealt cards for Blackjack, refereed Human Foosball, and more!  We are so grateful for their help,” said Martino.

Game Night was a success and students had a great time while supporting six great causes.

“Overall, game night was such an incredible experience for an even better cause!” said Butterworth.