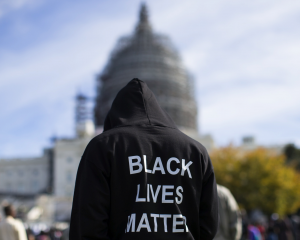 Anyone who has read one of my opinion pieces before knows that those are the last words that would ever come out of my mouth. However, as of late, they seem to ring startlingly true.

Discrimination has existed in this country since long before Donald Trump did.

Slaves were considered sub-human, whipped like dogs, fathers torn from their children, and women raped. The weight of American “ingenuity” – oppression – broke their backs and built itself on their bodies. This lasted for centuries, around 245 years. The boldfaced ignorance it must take to think a stain that deep would simply vanish once slavery did is absolutely astonishing.

That stain has aged. Like blood seeping into porous concrete and drying rusty brown, it has aged. And like a rough-hewn construction crew, we’ve poured new layers of concrete over it.

Never has progress come in leaps and bounds, always in deliberate, hard-won steps. The desegregation of public spaces and schools, the first interracial marriage, the March on Washington, the first black president – all had to be fought for, whether it was in streets against firehoses and police dogs, or in courts facing boards of education.

Still, the names of young men like Trayvon Martin and Michael Brown scroll across news screens and linger on the lips of protestors and their counterparts alike. Martin was described by shooter George Zimmerman in his call to the Sanford police as “real suspicious” and “look[ed] like he [was] up to no good or he [was] on drugs or something”. Shortly after, Zimmerman shot Martin during the pursuit that police had advised him against.

In the wake of his death, the symbolism of the dark hoodie evolved. In Zimmerman’s – and so many other’s – eyes, a young black man in a hoodie was suspicious, “up to no good”. In rebellion against that notion, young black men began wearing them to actively disprove racist stereotypes.

After Zimmerman was acquitted in 2013, the BlackLivesMatter, or BLM, hashtag and its accompanying movement began in response. BLM rose to prominence because of protests that began in Ferguson under the banner of the movement.

Brown was fired upon by white Ferguson police officer Darren Wilson, who was helping look for robbery suspects. Once Wilson found Brown, a brief struggle ensued, in which at least six shots hit the latter.

The misinformation that Brown was shot in the back with his hands up quickly spread through the media, and while not true, fueled the BLM movement. “Hands up, don’t shoot” became both a cry of anger and a plea for justice.

America’s racist history did not fail to come through, and those opposed starting competing hashtags like AllLivesMatter and BlueLivesMatter.

If one population has twice the chance than another of being fatally shot by those meant to protect them, something is very wrong.

If men and women have to steel themselves against being pulled over because of the color of their skin, something is wrong.

If mothers and fathers have to remind their sons to pull their hoodies down before they step out of the house at night for fear of losing them, for fear of them dying in the street, something is wrong.

The AllLivesMatter and BlueLivesMatter movements are different because they stand for no reason beyond subverting, invalidating, and detracting from the BLM movement. They were created in response to black people demanding – not more – but equal. America doesn’t tolerate that, and it never has. Some of our most difficult growing pains have come from those living in the “land of the free” demanding actual freedom.

Yes, everyone matters, but not everyone is followed around a store by the owner for fear of them stealing something. Not everyone is considered inherently suspicious, for what? Being young? Being black? And certainly, not everyone fears losing fathers, mothers, sons, daughters, and friends to our system of protection.

Touting “AllLivesMatter” or “BlueLivesMatter” is the equivalent of someone saying, “My grandfather died yesterday,” and replying with, “Well all people have to die eventually”. Yes, we all die. However, choosing to say that, when it is abundantly evident that one particular person who was special to someone else has died, is both irrelevant and hurtful.

As “Orange is the New Black” actor Matt McGorry tweeted, “#BlackLivesMatter doesn’t mean other lives don’t. Like people who say ‘Save The Rainforests’ aren’t saying [Forget] All Other Types of Forests’.”

American race relations are only one example of the discrimination and discord that seethe beneath the surface.

Trump’s campaign for and election as President of the United States seemed to call attention to every major issue in our society. As a nominee, he addressed race relations, sexism, and LGBT+ rights, to name a few. However, as the Republican nominee, there was a large portion of the population left unhappy with how he addressed those topics.

To women, he said, “I don’t even wait. And when you’re a star, they let you do it. You can do anything.” The rest, while widely known, isn’t school newspaper-appropriate.

It’s easy to pin problems on Trump because of how vehemently he perpetuates them and how far in the public eye he is. So many people are only now turning their eyes to centuries of systematic oppression and discrimination, when it’s been there since long before the 2016 presidential election.

Allowing ourselves to wrap these issues up in one man is dangerous. His character bleeds into the problem, and the problem into his character. It grows difficult to distinguish the two: are we criticizing Trump, or are we trying to address deep-seated societal issues? Once he leaves, do our country’s problems leave with him? Another four or another eight years isn’t going to resolve everything, and thinking that it will – that racism, sexism, and homophobia vanish once their symbol does – is foolish.

Yes, he perpetuates and even symbolizes conservative views of increasingly controversial issues. However, we can’t forget that at a base level America’s problems have about as little to do with Trump as he has business being in the White House.