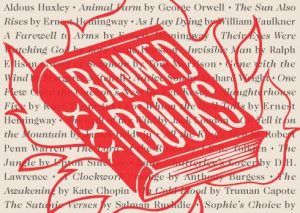 We live in a society where information is abundant.

From sharing our whole lives on social media platforms to having an unlimited supply of documents and websites to use for research, society relies entirely on the accessible information that technology provides.

However, with this new era of available information, debates over whether or not certain information should be censored from public view has been argued amongst politicians long before Julian Assange created WikiLeaks over 10 years ago.

Most recently, schools have come under fire as some parents have advocated for the removal of “sexually explicit books” and books containing vulgar language and excessive violence from schools’ curriculums.

In Virginia’s General Assembly this year, a bill will be debated among legislators that would require schools to inform parents of books with “sexually explicit content” and provide students with an alternative text for parents who do not wish their children to read these books.

Yet, by banning these books, is the government denying students their right to information? How far can the government and parents go until what they are doing is considered censorship?

Founding Father Benjamin Franklin once said, “If all printers were determined not to print anything ‘til they were sure it would offend nobody, there would be very little printed.”

The goal of books is not to make everyone happy or comfortable. Books allow people to explore new possibilities, go beyond one’s everyday knowledge, and learn about something new.

Teachers do not choose books for their curriculum because they want students to read “sexually explicit material”. They choose a book because they believe it will provide their students with a life lesson or contains a moral question that will aid in students’ development.

“If you have a worldview that can be undone with a novel, let me submit that the problem is not with the novel,” said author John Green in response to his book “Looking for Alaska” being pulled off of school bookshelves.

Many of the books that parents wish to be removed from bookshelves are books that contain racial themes, profanity, different religious beliefs, and homosexual protagonists.

Although it is important for students to read age-appropriate material, the belief that parents can shield their children from world realities that they deem inappropriate is a form of privilege.

For many students, the realities in books are things they face in everyday life. Students across the nation face racial prejudices, hate crimes for who they love, gender inequalities, religious discrimination, and violent upbringings.

If parents believe shielding  their children from these world realities will keep them from facing these truths later in life, then they underestimate the complicated realities of the world.

“If there is a bedrock principle underlying the First Amendment, it is that the government may not prohibit the expression of an idea simply because society finds the idea itself offensive or disagreeable,” said Supreme Court Justice William J. Brennan Jr. in the court case Texas v. Johnson.

In Accomack County earlier this year, parents wanted the removal of two classics, “To Kill a Mockingbird” by Harper Lee and “Huckleberry Finn” by Mark Twain, due to vulgar language and sensitive racial topics. Both books are cornerstones for American literature, and depict the racial prejudices of their time.

By banning these books, schools are wiping away an important part of American history. Although students will still learn of these historical events in history class, a personal account one reads in a book makes the history a reality.

If parents and the government deny students the chance to learn the bad parts of our history on a personal level, then they are creating a generation of narrow-minded individuals.

If parents and the government deny students the chance to learn of slavery, of hate crimes towards the LGBT+ community, and of sensitive situations in regards to the sexual and physical abuse of women, then they are no better than someone who refuses to learn from the past.

“Censorship’s bottom line is this: if the novel “Christine” offends me, I don’t want just to make sure it’s kept from my kid; I want to make sure it’s kept from your kid, as well, and all the kids. This bit of intellectual arrogance, undemocratic and as old as time, is best expressed this way: ‘If it’s bad for me and my family, it’s bad for everyone’s family,’” said author Stephen King.

Parents have good reason for not wanting their children to read certain books.

In a world of constant violence, it is easy to want children to hold on to their naivete and innocence. Concerns over books with racial slurs cause parents to debate if such exposure influences racial prejudices.

However, this form of thinking will only harm students in the long run. Books that use racial slurs to paint a picture of the extent of racial prejudices do not catalyze racism, but rather raise a moral discussion about race in American society.

The mindset of prolonging students’ introduction from the safety of adolescence into the complex truths of adult life will inhibit their growth and understanding of the world.

Books create inclusiveness. They teach us the good in humanity, but they also remind us of the bad.  A book censored because it makes people uncomfortable limits people’s worldview.

If society was never exposed to something that questioned or disputed its beliefs, then society would be no different than its oldest ancestors.