Choral members deck themselves out as characters

The magic of Disney is a “tale as old as time” and an inspiration to children of all generations. Through a local theater company, Godwin students are helping to spread Disney magic by making story book and action heroes come to life for children in the Richmond area. 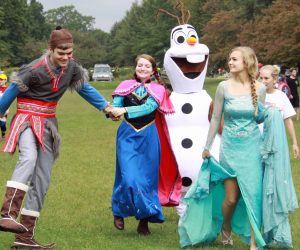 The academy offers after school classes, camps, and workshops throughout the year. They have many services, such as helping students prepare to audition for commercials and film and their most popular, dressing up as princesses and action heroes.

“We pride ourselves in being the most realistic characters in town,” said Papa.

The characters go to birthday parties and private events. As community service, they have been to The Grand Illumination in Downtown Richmond, a run for Down syndrome, a run for pediatric diabetes, and they have visited sick children in the hospital.

“Getting to interact with the kids is something I always look forward to, and is always lots of fun,” said Harper.

The characters include Disney classics like the cast of Frozen, Disney princesses, superheroes, and many more.

“It almost makes me want to be a little kid again. They truly believe that Kristoff, Anna and Elsa came just to see them,” said West.

Private parties consist of games and one-on-one time with the child.

Not only kids will come up to the characters during events. Sometimes parents or grandparents will come up and ask for pictures as well.

“You can’t understand the true magic of being a character until you put on the costume and see that first child. It’s one thing to put on a costume and be yourself pretending to be someone else, but being looked at, treated [as], and believed to be this amazing character that kids adore is a life-changing experience,” said Papa.