And they’re off! Giddy-up Godwin- By Features and Flair Editor Brittany Bell 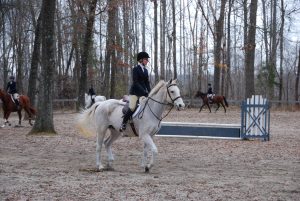 While some students spend their weekends watching movies and sitting around the house, other students will spend hours waiting in anticipation until they can mount their horses and compete in equestrian riding tournaments.

Several students at Godwin belong to barns within the Richmond area and dedicate their free time to training and competing in horseback riding competitions.

Senior Julianne Carroll has been riding for 11 years at her barn, Level Green, in Powhatan. During the competition season, she will compete with fellow Level Green teammates at the American Interschool Riding Competition. 12 barns compete at the competition with three teams for each barn.

There are roughly 20 people per team, and Carroll is the captain for one of her barn’s teams. At meets, competitors draw horses’ names out of a hat to select the horse they will ride in order to keep the playing field even. To prepare for these competitions, Carroll has a specific strategy.

“I ride a different horse every week while training because it gives me practice adjusting to individual horses’ styles and personalities,” said Carroll.

Godwin chemistry teacher Jessica Boppe is an instructor at Haverhill Farm in Manakin-Sabot and says that one of the most important lessons is learning how to interact with the horses.

“A lot of it is mental game, but ultimately, it’s teaching the communication between horse and rider, so when we get to the competition it’s easygoing,” said Boppe.

Most of her lessons are for pleasure riding. However, she does teach students how to ride in competition.

One student who has had success in equestrian competitions is junior Sydney Spevak. Spevak has been riding for 10 years at the James River Equestrian Center in Midlothian. Her recent accomplishments include placing second out of 25 and third out of 50 at state finals this past November. 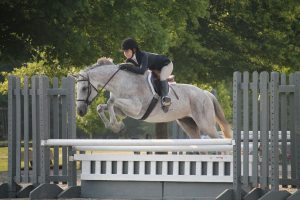 Success in horseback riding takes time and committment. According to Boppe, the people who are dedicated to the sport will practice rain or shine for hours on end.

“I typically ride five to seven days a week and practically live at the barn during the summer,” said Spevak.

The commitment required for horseback riding is just like any other high school sport, and lately there has been talk of bringing the sport to Godwin.

According to Boppe, the liability required to make horseback riding a varsity sport would be too prohibitive, but it is still possible to start a student-run club.

A club could help organize and give out United States Equestrian Federation lettering, which is how horseback riders rank up in competition. Students could also use the club to get better recognition for college.

“I would be willing to sponsor the club and help with lettering if there was student interest in starting it,” said Boppe.

Whether or not horseback riding will become a club at Godwin is up to the interest of the students and whether they are willing to work for it.

“Making riding a club sport at Godwin is definitely something I would like to pursue. I would love to build a little equestrian community with those who are passionate about riding,” said Spevak.