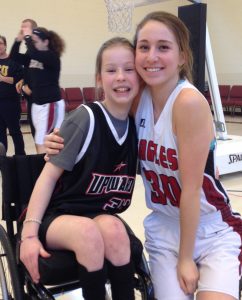 Coaching children takes a certain level of skill and dedication. Not only does it require a full understanding of the game being played, but it also demands a charismatic personality that can keep the kids committed and engaged in the sport.

Add to the mix a disabling condition that confines the youth athlete to a wheelchair, and the challenge increases exponentially. Now, the coach must change his or her approach to the sport, as well.

Senior Maggie Blackmon experienced this challenge when she began volunteering for the Upward Wheelchair league that her dad started seven years ago. The program aims to teach wheelchair-bound children how to play basketball.

“It started with three kids playing against my brothers and me, and has grown over the years,” said Blackmon.

Blackmon coaches the kids, developing their basketball skills on Saturdays during the season and in August over the summer. Most of the kids’ ages fall in the middle school range.

“Every once in a while there will be this huge upset like against the Freeman Boys. There is always this rival-like hatred when they walk in, and their faces are hilarious when they see those massive guys. They mean the world to the kids,” said Blackmon.

Blackman’s main focus when coaching the kids is on their arm strength. Drills like “Zig-Zag” help the kids become accustomed with moving their wheelchair to play a game.

“The kids get so happy when they play, and it is the cutest thing ever. They will shoot a three, and they will cheer and look at the crowd with such excitement,” said Blackmon. 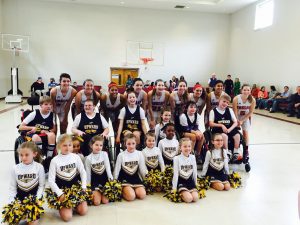 Along with playing basketball, the league also has an event called “Family and Friends Day” where people gather together to celebrate a successful season.

“One year we had the Glen Allen Pep Band, and the media was there. It was so much fun,” said Blackmon.

Blackmon herself plays and is a captain on the Godwin girls’ basketball team. She played Junior Varsity her Freshman year and Varsity her next three years.

Blackmon does not plan to play in college, but does hope to continue coaching basketball at Upward.