Standing Up for Progress- By Assistant Editor-in-Chief Charlotte Zerbst

How to stay hopeful in the wake of the election 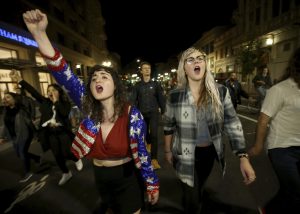 Waking up Wednesday after the election, I had a heavy heart.

I felt the need to mourn. I made my opinion, made my side’s arguments, and brushed off the thought of America electing someone whom I disagree with so heavily.

But on Wednesday morning, my nightmare came true as I read the results. I felt helpless and hopeless.

America, as a whole, made a decision. And although I personally may not agree with the decision, this should not be a time to mourn and be upset.

So much progress has been made over the past eight years. Electing a president who may want to take that progress away should not be seen as a defeat, but rather another challenge we must push through.

As noted feminist Gloria Steinem said in an interview, “This is a vote against the future, and the future is going to happen anyway.”

Over the course of the Obama presidency, a few momentous decisions have been made, including the legalization of gay marriage, the passing of the health care reform, and the election of our first black president.

Our government is our voice, all of America. We are inclusive, not just of older people or white people or men. Everyone has a voice and when we use that voice together, progress will be made.

As a high school student, my power feels limited, and at times, I feel helpless. But there is so much that can be done and it all starts with a positive outlook.

Complaining and arguing will get us nowhere in these next four years, because our world is not over. All we have to do is to continue to stand for what we believe in, whether our legislature supports us or not.

“The world will not end because of a Trump presidency. Tomorrow, the sun will rise and the day will be a lot less joyful than I imagined, but I’ll get through it. We all will,” said journalist Roxane Gay in response to the results.

Gay also calls all Americans to action. She says we must vote, we most protest in ways we feel comfortable, and we must stand tall to push through.

Many high school students were unable to vote in this election, as we were too young. But most of us will be able to vote in the next election, so working to have everyone’s beliefs represented is a tangible dream that should not be given up on.

Being educated during an election is an important part of having the responsibility to vote. Understanding who you are voting for and the impact that your vote will have amongst other groups, and not just yourself, is a part of voting that can change certain views.

At the same time, there is not one specific way to influence change. Taking a stand comes in many forms if you don’t agree with how you are being represented.

The only way to hurt this privilege is by staying silent.

One’s worth is not determined by a single leader. Some may feel pushed down or ignored with the results of this election, not only because the president, but also by the citizens who support him.

But these people are not the ones who determine who you are. You define yourself, with your friends, your work, and your character. Self-worth cannot be dictated upon us due to a single leader or a group of powerful people.

The power is within the people. We are united in the fact that we all have a say, although at times it will be tough and it may feel impossible to make a change.

We will not stop progressing due to the governmental powers. We will work harder and we will protest, through social media, writing, and local influences.

We will make the changes that we wish to represent us, regardless of who is leading our country.