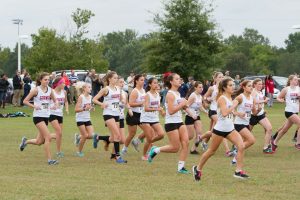 For the first time in three years, the entire girls cross country team competed at the state level. The team, along with three runners from the boys team, were able to compete the second weekend of November at Great Meadow.

The girls’ side of the team has a history of making it to the state meet, whether as a team or individually, but has not been able to compete as a complete team since 2013. The boys team made it to the meet last year, but did not reach the qualifications to go as a team this season.

“Since I’ve been here for 11 years, I think we’ve made it four times on the girls’ side and only three times on the boys’ side. We’ve always sent individuals in the new system, but in the old system there were definitely years when we didn’t send anybody,” said coach Jonathan Lauder.

In 2013, the girls team won the VHSL’s first 5A State Championship meet by 34 points. This year, the girls team placed 12th, an unexpected result considering their previous performances at the competition.

On the boy’s side, seniors Reid Weston, Matthew Chilton, and Ronan Higgins had the opportunity to compete individually at the meet.

At the state meet, Reid Weston was Godwin’s first finisher and placed in the top 20, and Ward set a personal best in the race.

“It was a great experience being able to compete at the state championship with Matt and Ronan [boys cross country runners]. We’ve pushed each other to be better all season and finishing top 20 in the state was a pretty good result to end with,” said Reid Weston.

Although Lupica was not feeling well the day of the race, she pushed forward and performed her best.

“States was a fantastic experience… it was beyond amazing to be there with the team and be able to run against the best of the best,” said Lupica.

Also notable this season was Ellie Jeffrey, an eighth grader at recently renamed Quioccasion Middle School. Jeffrey holds the second fastest time of the season at 19:24.

Jeffery would have gone to states if not for the VHSL rule that makes middle school students ineligible to compete at the varsity level.

“I had a lot of fun this year getting to know and train with the girls. That makes me really excited to get to help contribute to the team and hopefully help them get to states next year,” said Jeffrey.

Though the team did not perform as well as expected, Lauder is still proud of the outcome of the season.

“We are excited about the girls’ season. Our goal was to make the state meet, and we did that. We also bring back a lot of key pieces for next year and think we can be a top team in the region and state for the next few years,” said Lauder.