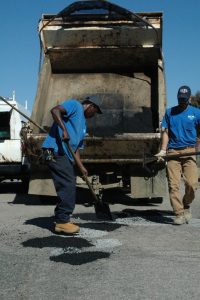 Hallelujah! We’ve been saved. At roughly 12 p.m. on Oct. 24, the pothole gods came down from their thrones of cement and saved the Godwin community from the death-defying depths of the Godwin potholes.

For the past few months, these hindrances have endangered the lives of students and parents, alike, growing deeper every day.  Whippin’ into the parking lot around 8 a.m. was like playing a game. If I successfully made it through the maze of terror, then I won, and protected my car from total destruction.

Spoiler alert! I never won. Instead, my car would hit these holes making a screeching sound like a dying cat.  Honestly, the most stressful part of my day was when I had to choose the route to take to avoid the trench-like holes.  My AP classes had nothing on the amount of brain power needed to get around the potholes.

When entering the senior lot, you had two options: (1) either hug the curb and risk hitting the big papa pot hole and scraping your new paint job, or (2) maneuver your car into a wide swing around the corner while hitting about 500 miniature potholes, giving your car tires a massage.

Either way, hitting the treacherous holes in the wee hours of the morning was possibly the best way to start your day. Not only did the holes give passengers a fun little roller coaster ride, but they also acted as an alarm clock, waking students up from their early morning daze. Let’s face it, the holes were the only reason you were awake enough for your frantic sprints to first period.

However the best part about the holes, was when you could say goodbye to your car and say hello to your mechanic.

Yes, I think I’m going to miss our potholes – especially during the winter when the foot-deep holes got frozen over and played the dirtiest mind game ever. What you thought was a normal snow covered street was actually the potholes filled with evil black ice that made your car skirt and slide around the corner.  Watching my peers try to navigate these deadly booby traps was like watching Bambi try to walk on ice.

Yes, many students did complain and even reported our endangerment to Silence Hurts.  Teachers, as well as administration, said they had it bad with pot holes and were sympathetic to our dangerous battle. However, not parking in the senior lot, they didn’t truly understand the extremity of our problem, and the true endangerment of our lives as we plunged through the ocean of holes- some large enough to engulf a Mini Cooper.

Before our problem was fixed, I personally volunteered to fill the holes myself as the good citizen I am. Sadly, I was told I would end up in jail by the administration and therefore, my good deeds could not be fulfilled.

We are all “#blessed” because the hole filling was scheduled for this summer. However, the problem “as a hole” was becoming too large to ignore.  So on behalf of the lives of all Godwin students, thank you administration and the kind workers of Henrico for saving our cars and our hearts from the constant destruction that we faced.