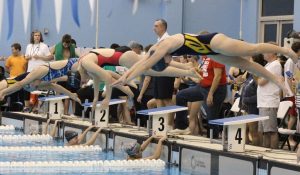 Starting this winter sports season, swimming will become a varsity sport at Godwin. Students will be able to compete on a varsity level and attend more meets and conferences than in the past.

Before 2012, swimming was not a part of Godwin athletics. In fact, swimming only became a club three years ago. In 2013, juniors and seniors worked to establish a club level team and keep a regular swimming community going at Godwin, even though they would never be able to compete on a varsity level themselves.

Current swimmers are grateful for all the hard work those students put into keeping the Swim Club alive.

“I was so excited to learn that swimming was going to become a varsity sport. Godwin had an excellent club team and we’ll do even better as an actual team,” said sophomore Patrick Lyons.

Many people in the past, including alumni and parents persistently showed an interest in swimming becoming an integral part of the school’s community. Recently, more attention has been given to this sport, including fundraisers organized by the club in previous years to raise money and awareness. This has all led to swimming becoming a varsity sport.

Bailey began to swim competitively in the ninth grade at NOVA and has been coaching different teams of varying ages since high school. Having attended Godwin, Bailey is especially enthusiastic about coaching the new team.

“High school age kids have always been a gratifying group to work with. They can make a lot of leaps and bounds in their performances with the right improvements, and watching them grow over a season is one of the most rewarding experiences there is,” said Bailey.

Workman began swimming competitively when he was 13, and when he graduated from high school, he began coaching during the summers.

“After I graduated from college I really wanted to keep coaching, so instead of coaching during the summers, I decided to try getting a position at a high school,” said Workman.

Workman is most excited to see growth in the team and encourages Godwin students to come to the meets to support the new team and enjoy the positive energy and fellowship.

“If you have never been to a swim meet, I would strongly encourage you to come to at least the beginning to see the cheers.  But the energy of meets doesn’t die after the cheers… the adrenaline rush of waiting to see who will come out on top is almost addicting,” said Workman.

In past years, members of the swim club saw each other only at swim meets and club meetings. The team did not practice together and a family bond was never prominent like a traditional high school sport. This year, formal practices in the mornings will be established, and all athletes will be required to attend each one unless they are NOVA swimmers, or early bird students for which a separate schedule and practice routine will be provided.

“I was in the swimming club last year. I’m really excited to be able to compete on a varsity level this year. I think it’s a great opportunity for all the swimmers at Godwin,” said sophomore Emma Farney.

Both coaches are very optimistic about the season and look forward to building a solid foundation for the team by bringing the team together as a family and closing the gap between the NOVA and non-NOVA swimmers.

Bailey and Workman plan on to establish this by introducing team breakfasts and making relays a center aspect of the season. They want the large team to be able to communicate well with each other and become a family.

“My only expectation is that our team will come out stronger on the other side. I want the team to feel bonded by the work they put in and to enjoy their time swimming with their friends while making strides of improvement over the season. As long as the team can do that I don’t care what our record is,” said Bailey.

Swim will attend and compete in five regular meets this season and if they perform well, they will have the opportunity to compete in conferences and regional meets.

The students participating on the team are very enthusiastic regarding this new change and look forward to the upcoming season.

“Swimming has always been more of an individual sport. Now that it’s a varsity team, we have a chance to represent the Godwin family and become more like a team,” said junior Emma Ford.