New Fools on the block- by Features/Flair Editor Brittany Bell 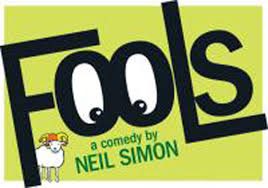 Every year Godwin produces a Fall play, and this year the drama department is proud to present the comedy Fools.

Fools, written by Neil Simon, takes place in Kulyenchikov, a small Ukrainian Village that has been cursed with two hundred years of stupidity. The villagers are able to recognize the stupidity of others, but not their own.

When Tolchinsky meets the person behind the curse of stupidity, things become chaotic as new elements of the curse are revealed. Will he succeed in teaching Sophie, or will he himself fall victim to the curse that has been plaguing the village?

Fools will have the audience laughing as the characters scramble to break the curse that has left them brainless their entire lives.

“I think this will be one of the plays that will reach out to the students because it is a comedy and they will enjoy it,” said Brocklehurst.

The cast members themselves think the play will receive positive feedback. Whitty agrees with Brocklehurst that the play will be a hit.

“This play has truly made an effect on me and I have learned to love it because it’s honestly so funny,” said Whitty

The cast has been practicing every day since the third week of school to perfect the performance and make it memorable. Both leads agree the casting this year will lead to the play’s success.

“The whole cast has worked very hard to make every single joke a good punchline; the audience will love the jokes,” said Whitty.

Beyond their comedic success, the cast has also been working hard on their acting and creating the perfect environment for the story.

“The emotional connections that everyone has brought has clicked and really makes the story work,” said Brocklehurst.

Fools hits the stage Nov. 10 through Nov. 12, starting at 7:00 p.m. in the Godwin auditorium. Tickets are eight dollars both in advance and at the door.