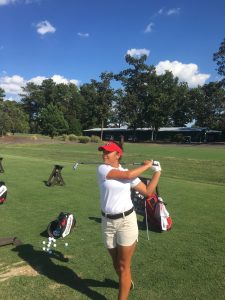 After a win in the district championship on the Belmont course, Godwin advanced to Regionals and ended the first day in third place. “When we went back to the hotel, I personally felt good with where the team was and wasn’t worried for day two of the tournament,” said team member Andrew Kennedy (12).

“We were in third place after the first day. Only the top two teams advanced to the state tournament so we had a lot of pressure on us, especially the five seniors because that second day could have been the end of their golf careers at Godwin,” said Coach Tom Hoy.

Only six of the team’s members competed in the regional and state tournaments including Andrew Kennedy (12), Diana Domenech (11), Adam Collins (12), Jack Keller (12), Parker Shaw (12), and Dalton Smoot (12). Although a small group, the teammates came together and paved the way to victory.

“Our goal was to beat Matoaca by one and we ended up winning. It was a great experience and very nerve-racking as players were finishing up,” said Domenech.  Domenech later attended the girl’s individual state tournament and placed in 11th.

The regional tournament was played on a course in which the first nine holes were short and the back nine holes were long, giving players the feeling that they were competing on two entirely different courses. The lead scorers for Godwin were Kennedy, with a combined score of 146, and Domenech with a score of 153.

After the regional win, the Eagles advanced to the state championship. Though falling short to Deep Run, the team brought home a second place state result.