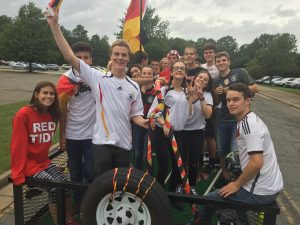 This year, Godwin students were excited to host a group of German exchange students.

Henrico County has a partner county in Saarland named Saarpfalz-Kreis, and the county managers in both Henrico and Germany want to continue this partnership that began 20 years ago.

The American students visit Germany in the summer after the Germans’ visit to America and stay with the family of the student they hosted. They leave after school ends here but while it is still in session in Germany.

Godwin is the high school in Henrico County that has the opportunity to participate in this program because it is the school with the most students learning the German language. This exchange happens every two years.

At Godwin, students taking German I through German III are asked in the spring if they would like to host a German student during the fall exchange. The class then participates in Skype calls until the exchange students are selected.

To experience American culture and traditions, the German exchange students receive an itinerary.

In addition to shadowing students at school, the exchange students attended afterschool events such as football games and homecoming festivities. The students also had an “electives day” when they visited many of the electives classes at Godwin.

The German students visited Virginia attractions such as Williamsburg and Jamestown and even visited Washington, D.C. for two days. They went on outings with their host families and went to local attractions like Carytown and the James River.

Both the American and German students learned more about culture based on this experience.

Junior Abigail Bogin is hosting Puline Arend. When asked of her impression on America so far, Arend said, “America is definitely different than Germany.”

She said the school systems varied in many ways such as America has a separate middle and high school, but Germany combines both schools into one.

There are also noticeable cultural differences between the students in both countries. “Americans are more open to new people,” said Arend.

Godwin German teacher Kristen Macklin said that this program is beneficial to students because it allows them to put their foreign language into practice, and it is an authentic application of what they are learning.

“I think it makes our students more open-minded and culturally aware,” said Macklin.

She also said that students are able to form long-lasting and memorable relationships and friendships.

Arend’s reason for partaking in this program is similar to that of the other students.

Arend said, “I knew it was going to be a great experience because I could meet a lot of nice people and have the opportunity to see a new culture.”

Although she was not in America for long, she enjoyed her experience and learned many new things.

“I can say that I definitely like America,” said Arend.