After countless statements such as, “A person who is flat-chested is very hard to be a 10”, is anyone really surprised by Trump’s most recent scandal?

That particular gem came from a 2005 appearance by Donald Trump on Howard Stern’s radio show; they had been ranking the actresses of Desperate Housewives. Ranking people isn’t strange to Trump; he’s been caught more than once assessing women based on their breasts, behinds, and just about anything else that he feels like commenting on. 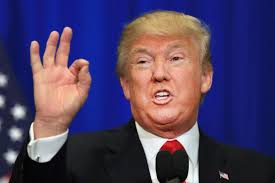 According to over 20 of Trump’s former cast, crew, and producers from The Apprentice in interviews with the Associated Press, he repeatedly targeted women without a second thought.

In one statement, Trump stopped mid-conversation to assess a woman, looking for a confirmation on how sexually attractive she was.

“Everyone is trying to make him stop talking, and the woman is shrinking in her seat,” the anonymous interviewee continued about Trump’s comments.

Knowing that he’s said those things, it isn’t surprising to hear him bragging about sexual assault.

“And when you’re a star they let you do it. You can do anything,” Trump said in a 2005 Access Hollywood interview.

Of course, all of that nonconsensual groping would be after he kisses them without their permission.

Be careful about calling him out on any of his behavior. In 2015, at the first Republican debate, Fox anchor Megyn Kelly speculated on whether or not anyone who clearly holds such misogynistic views is fit to be president.

He quickly fired back with a tasteful, “You could see there was blood coming out of her eyes…”

Trump continued by attacking Kelly over menstruation, something that has absolutely nothing to do with the issue at hand.

Somehow Trump both proved Kelly’s point and absolutely failed to refute it in two sentences. Half of the nation menstruates, and his failure to even make a real attempt at appealing to that demographic isn’t just a social justice issue, it’s politically idiotic.

As a woman, I feel a glowing sense of comfort and safety knowing that the potential president of the United States wants to grab me without my consent. Unless, of course, I’m not a perfect ten. Which I, like just about every woman he’s ever thought he had the right to have an opinon on, am most likely not.

The fact that he doesn’t care enough about becoming president to cover his own misogyny, even just until the election is over, shows that he isn’t exactly suited for the role of president.

Even Hillary Clinton is playing at being more liberal than she really is to garner the support of Bernie’s racial minorities and millennials who are looking for social change.

What is interesting is Trump’s response to the backlash following the surfacing of the clip.

However, Clinton could have handled the mention of her husband better than she did. During the third debate, when it was brought up, Bill’s name barely came out of her mouth, if at all. Neglecting to answer a question is worse than taking responsibility and quickly getting back to the debate.

None of this excuses Trump giving the “okay” on sexual assault, but that might not be clear based on his “locker room talk” theory.

Apparently, anything and everything goes as long as it occurs within the sanctum of a men’s locker room. At least, it does according to Trump.

It doesn’t, according to countless male athletes.

This “boys will be boys” rhetoric is tired.

Men are not boys. Men are adults who can make their own choices about what they say and do. Men take responsibility for their mistakes instead of immediately mentioning ISIS or pointing fingers at former presidents.

A future with a man like that at the helm of this country is not one that I want to see.