Todd Allen Phillips and his train of Hope and Dreams 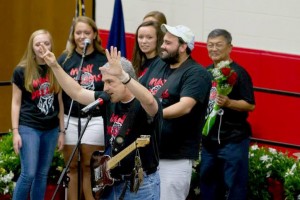 Two years ago at baccalaureate Todd Phillips led a host of others in a performance of a Bruce Springsteen song called “Land of Hope and Dreams” [Todd’s performance].  It’s a song that I love particularly because it is about what America is supposed to be. Springsteen once explained that all are welcome on this train – not just “the righteous and the holy” but “saints and sinners”, “losers and winners”–you just get on board. I remember telling Todd the next morning that it was a perfect song for the occasion.

To cite one Springsteen song to represent Todd’s life is probably folly, but this one might capture his essence as a teacher and coach.

“Grab your ticket and your suitcase, thunder’s rolling down this track

Well, you don’t know where you’re going now, but you know you won’t be back” 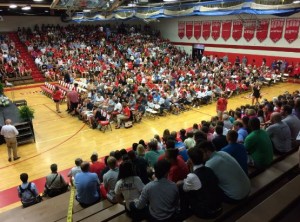 This train carries losers and winners”

“I said, this train, dreams will not be thwarted

This train, faith will be rewarded”

Oh, meet me in a land of hope and dreams”

If you got on the train with Todd Phillips, he helped you get closer to where you needed to be.

If you were on the Math/ Science train, Varsity Math to many of you, he certainly told you to “embrace your inner nerd”, but you might also have been encouraged to stop hyper-focusing on a GPA and to try a sport or extracurricular activity, or to go to a dance where you might see him in his 1970’s tuxedo replete with a pink ruffled shirt. 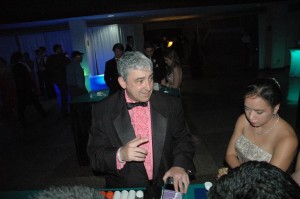 And that Math/ Science train would have included his vision of and exhaustive work on the new Center—new and improved to better serve our students.

If you were on the basketball train with him, he helped you develop as a player and a person. He guaranteed that each player would play some in each game, and that everyone would start at least once. Sometimes he probably lost some games because he played everyone and opponents didn’t, but teaching and giving kids a chance was the most important thing to him.

And on that basketball train, you would have fun while learning teamwork and discipline.

If you were on that tennis train with him, he did whatever he could to help you win a state championship, and then he relished his inclusion in the celebratory swim in the James River.

If you were on the Godwin faculty train, you admired Todd because the success and awards that came his way started with hard work. He analyzed, organized, processed, and repeated so that he could improve each school year. 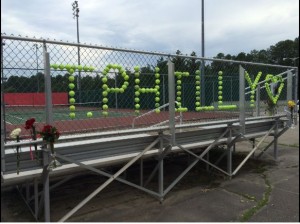 Most importantly, if you were on this train, you knew that a relationship with Todd included his willingness to serve others- a whatever, whenever, however approach to helping through acts of kindness.  Ivy leaguer Godwin grad or Godwin student struggling to graduate? Star player or reserve? Close personal friend or just one of the Godwin family?

No matter, he was there.

He was there to encourage you, to needle you, to tutor you, to advise you, to make you laugh or help you with disappointment.

In so many areas, he was there.

He was there to help us reach our land of hope and dreams.

Below is a link to another Eyrie Post pertaining to the life of Todd Phillips:

The Eagles’ Eyrie “The life of Todd Phillips”