On June 11, the girls soccer team played their way to the Virginia 5A State Championship at Robinson High School.

The team’s season began nearly three months earlier in mid-March. The girls were looking to improve upon the previous year’s state tournament run, which ended for them in the semifinals.

The Eagles played Albemarle High School in the state semifinals on June 10. The match went to overtime knotted at 1-1. Just over one minute before the match was going to head to penalty kicks, Guy scored the game-winner to give the Eagles a 2-1 victory in double overtime.

“My game winning goal was so surreal. Watching the ball go into the goal and then the celebration was one of the best moments of my life,” said Guy. The following day, Godwin played in the finals against Tuscarora High School. Tuscarora, the 5A North Region champion, had defeated Princess Anne in the semifinals the previous day.

Godwin fell behind in the first ten minutes and would have to play from behind in yet another match.

Later in the first half, Godwin earned a free kick about 25 or 30 yards from the goal. Junior defender Sara Puglisi came forward to take the kick, knotting the match at 1-1.

The first half ended with the score still tied.

Godwin fell behind once again in the first ten minutes of the second half, 2-1. Minutes later, sophomore forward Paige Franks earned the Eagles two penalty kicks, leaving Godwin with a 3-2 advantage.

However, they relinquished this lead soon after and the match headed to overtime tied at three.

Three minutes into the first overtime period, Franks received the ball on a run towards the Huskies’ goal. The goalkeeper came out to cut off the angle, but Franks circled around her and slotted the ball into the net.

Godwin held on for the remaining seven minutes of overtime to claim the Virginia 5A State Championship 4-3.

“When I got the break away, I was not thinking about anything besides the ball hitting the net, and once I got the chance to just easily finish it into the goal, my emotions were all over the place. Taylor [Guy] and I could not let go of each other and I think we both started crying. It was a feeling I can hardly describe, but I will never forget it,” said Franks. 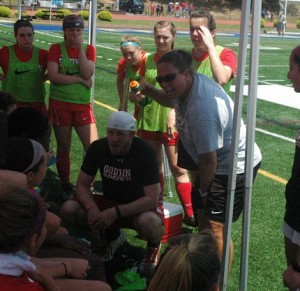 The Eagles enjoyed a great success in the regular season, starting on an incredible winning streak that included victories over powerhouses Atlee High School and Deep Run High School.

However, they suffered their first setback of the season in their second matchup with Deep Run, suffering a 1-0 defeat.

After this loss, the team won the remainder of their games in the regular season and clinched the number one seed in the Conference tournament.

Senior midfielder Claire Franks said, “When we lost it was one of the worst feelings, and the loss was a make or break moment for the rest of the season. But we took it as the opportunity to make us, so we put it in the past and started growing as a team. We took it as a lesson and said we were never going back to being in that position.”

They defeated Douglas Freeman 3-1 in the Conference semifinals, which ensured the team’s advancement to the Region tournament.

They avenged their only loss to Deep Run by defeating them 2-0 behind junior midfielder Morgan Hall’s two second-half goals, thus bringing home the Conference championship for Godwin.

The team steamrolled Matoaca 8-1 in the Region quarterfinals, setting up the fourth matchup of the season with Deep Run.

The match went to halftime deadlocked at zero before senior forward Taylor Guy scored the winning goal early in the second half. Godwin left with a 1-0 victory and a spot in the State tournament.

Godwin rolled to the Region championship by defeating Princess Anne 6-0.

After that, it was only a matter of winning the two matches necessary to take home the State Championship. 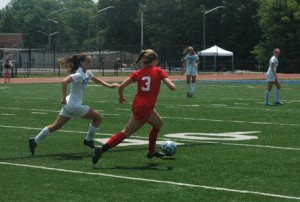 “Winning the state championship is such an accomplishment for all of us, knowing how hard we worked for it and we finally achieved our goal,” said Hall.

This championship means so much to the Godwin players.

Junior midfielder Lyndsey Gutzmer said, “It means so much to us, because every day we have been working so hard to get here, and I cannot believe how amazing it feels to have finally met our goal. We also worked this hard for our amazing coach, because she has been in this program for so long and she deserves this title more than anyone. I am so proud of us for being the first girls soccer program at Godwin to win the state title!”

The team’s success is not only a result of talented players, but also a talented coaching staff led by head coach Ali Toole.

Toole believes that the team’s success is due to the dedication and drive of each player on the team.

“Our 2016 soccer team was so successful because they all shared and were 100% committed to our goal of winning a state championship,” said Toole.

Five Godwin varsity teams qualified for the state tournament in their respective sports, but girls soccer won the only state championship for the 2015-2016 school year.

Activities Director Thomas Nadeau said, “Anytime a team wins a State Championship it is exciting for the school and athletic program.  For the Girls Soccer team to win their first in program history is extra special because it symbolizes the hard work of not only the girls on this year’s team but the hard work of all of the players that helped develop the program.” 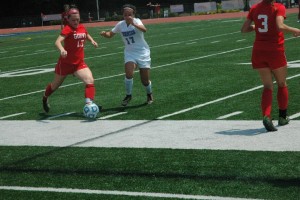 “We lose five talented seniors but have eight returning starters and other younger players ready to step in. I feel that if we continue to put the work in off season, we can have another successful season fighting for a state title repeat,” said Toole.

The future for Godwin girls soccer is bright, with so many talented players returning who hope to build off of this year’s state title.

“There was so much hard work and dedication in order to win the state title. This championship means the world to us!” said Claire Franks.