This past March the Godwin debate club won a debate conference resulting in senior David Lu and junior James Malaugh qualifying for regionals in April.

The club recently obtained a new sponsor, French teacher Laura Rhoades, who was approached by Godwin principle Beth Smith to sponsor the club.

Rhoades stated that her goals for the future of the club are to do more fundraisers and participate in more college tournaments.

“I joined the debate team as a freshman because I wanted to practice my speaking skills and learn how to think on my feet. I loved how in practically every meeting we talked about current events so as I learned how to argue better, I was able to learn about the world around me,” said Lu.

Lu has competed in seven debate tournaments, placing for the first time during his junior year at the Virginia High School League districts competition, where he came in second place.

Lu said, “My favorite moment in debate was when my teammate, James Malaugh, and I took home the gold at the VHSL regional championships.”

Debate Club has had a positive impact on Malaugh as well.

Malaugh said, “Debate Club has drastically increased my speech and argumentation skills, and while challenging it provides unique opportunities that look great on college resumes.”

He has competed in five debate competitions. His reason for joining was because of both his interest in debate and in speech.

Senior member of the Debate Club Jun Seok Bae, said “It definitely helps with timed essays since we have to spontaneously conjure up rebuttals on the spot of the debate. Debate absolutely requires some dedication into the research and designing your contentions to prepare for the tournaments, but it really is one of the more interactive and passionate clubs at Godwin.” 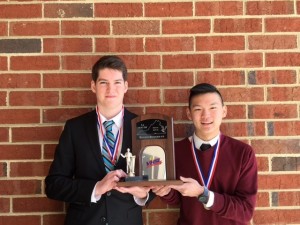