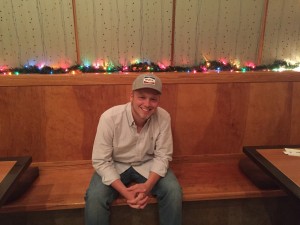 Godwin senior Andrew Nelson now acknowledges what he is.

He must do so in order to maintain what he is not.

What Nelson knows is that he is a drug addict.

And like most addicts, he lied daily and stole often, common pieces of the addiction package.

What he is not is a user. Nelson has been clean since October, maintaining sobriety with a strict regimen of meetings, careful control over his environment, and a tight schedule built around serving others.

But like all addicts, he must approach his recovery daily, like a full-time job, with an acute awareness of the danger of relapse.

“Thirty-three of every 34 people in recovery relapse. One in 15 dies,” said Nelson in a recent interview.

He also learned that 90 percent of all adult addicts began substance abuse as teenagers. Nelson actually began a bit earlier at the age of 12, binge-drinking stolen alcohol with friends.

Before he turned 13, Nelson began occasional marijuana use. Soon he was smoking pot daily, often stealing money from family members or neighbors for his purchases.

“Anytime I was able to drink and smoke at the same time, I felt like it was my birthday or something.”

By the time Nelson arrived at Godwin as a freshman, he had expanded his drug use with the use of prescription drugs such as Xanax and opioid painkillers like Oxycodone.

“Pot was absolutely a gateway drug for me,” said Nelson.

He added LSD and cocaine to his menu of substances, but it was his daily use of prescription drugs that brought about absolute addiction.

As his drug use intensified, Nelson’s friends often changed. He says he left behind old friends who were not doing drugs or who were not using as much as he was. Newer friendships were based almost always through drugs.

Nelson’s addiction demanded more. He used up to eight times per day, and mounting costs forced him into more creative financing.  He sometimes stole from neighbors’ medicine cabinets, but soon found that he could support his habit most efficiently by buying in bulk from local dealers at $2 per pill and selling them to users at sometimes $20 a pill.

“I never used heroin, but I would have if I’d needed to. It was ‘whatever it takes’,” said Nelson.

If there was a lowest point for Nelson, he says it was probably his sophomore year which he describes as “dark”.  He suffered from severe depression, recognizing the power of his addiction and hating himself.

Nelson’s first attempt at rehab came early during his junior year, but he relapsed. He used during the process, understanding how to time his use to avoid drug test detection.

A second treatment resulted in a Labor Day weekend relapse in 2015. Nelson said he felt he had things under control, but stole Xanax from a friend and went to a party where he drank. He then quickly resumed heavy drug use.

In October of 2015, Nelson entered detox for five days at Tucker Pavilion, a local hospital. He immediately was taken to a rehab facility in Nashville, Tenn. where he remained for 60 days. He then returned to the Richmond area, immediately reporting to McShin Foundation, a local drug treatment facility.

Nelson lives in a “sober living apartment” at McShin. He is the youngest member of his daily group counseling meetings. Most members are twice his age, according to Nelson. He works at a church most mornings and receives his education through homebound services as the first member of McShin’s new Recovery High School program.

Nelson estimates that 400 students at Godwin are abusing prescription drugs and that 200 of those are addicted.

“Many kids here need treatment. Maybe not enough has happened to them yet to make them realize it,” said Nelson. “But recovery is not for people who need it. It’s for people who want it.”

He is luckier than many addicts, Nelson says- lucky to be alive. Lucky not to be in prison. Lucky to still have a family.

Nelson says that his relationship with his family is better than ever, and he is grateful for their love. However, interaction with family must occur in strict environments. He cannot visit his older sister at college, for instance, because of the dangers in college settings.

Friendships have become more complicated, according to Nelson. Determined to remain sober, he simply cannot put himself in tempting situations like a high school party. Many of his old acquaintances drink or use some kind of drug, so he has few friends now. He finds companionship with others in recovery and has a Recovery Coach to help with the danger of a bad day.

“I know now that in life pain is inevitable, but I don’t have to suffer now anymore,” said Nelson.

Nelson hopes to attend community college after high school and simply wants to find a way to help others. His strict daily approach has ironically led to a feeling of freedom that was absent during the last six years.

“All my life I’ve been taking.  Now I want to know how I can help others.”

“I’m proud to say I’ve been through this. I don’t have to run anymore,” said Nelson.