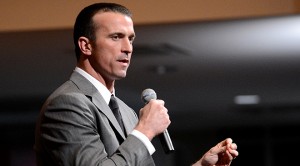 These were the repeated questions asked about Chris Herren.

Herren was once what many only dream of- a high school basketball hero in his town, later a dominating player in college, and eventually a well-paid professional with the promise of a long career.

But time and again his addiction to drugs took everything- his talent, his money, and almost his family.

Herren, whose nightmare and recovery is the subject of the Emmy-nominated ESPN documentary Unguarded, will speak about his long ordeal at Mills Godwin High School gymnasium in two separate programs.

The April 25 at 7 p.m. presentation will be for Godwin parents and community members and is open to the public. There is no charge.

A second program, for Godwin students, will take place April 26 at 9:30. This event is not open to the public.

While Herren’s athletic talents seem to make him unique, his drug problems reflect national trends. Like most addicts, he began substance abuse early in high school, beginning with alcohol and marijuana before beginning cocaine use as a college freshman at Boston College.

A failed drug test led to Herren’s transfer to Fresno State where continued drug problems mixed with basketball success. He was selected by the Denver Nuggets and later traded to the Boston Celtics before playing internationally in several countries.

Herren had begun using opioid pain killers and eventually heroin, reflecting a growing American trend. He fed his addiction in each of the foreign nations where he played, sometimes spending $20,000 per month on prescription drugs and heroin.

Along the way, there were failed drug tests, arrests, rehab attempts, overdoses, and a near fatal car accident. He strongly considered suicide to rid his family of the recurring nightmares he had forced upon them.

Herren lied to family, most often his wife Heather. He stole his children’s toys to pawn for drug money.

But eventually rehab worked. In Unguarded, Herren said he “found his soul” scrubbing pots and pans from morning to night in a treatment center kitchen.

Herren has been sober since August 1, 2008. He produced a memoir, Basketball Junkie in 2011 and formed the Herren Project, a non-profit organization dedicated to educating the general public about addiction and substance abuse and aiding those affected.

In a Note to Self for CBS, Herren wrote to himself, “You will find your life’s purpose from your struggles, and you will share your story and hope that it may help just one.”