Coach quote: “It was the first time we made the state meet in a few years, and we bring back four of our top six runners next year so we’re excited for the future.” – Lauder

Player quote: “We had a great season and reached our goal of making states. Through our teams hard work and grind we were able to get out of the region and compete against the best teams in Virgina.” – Hill 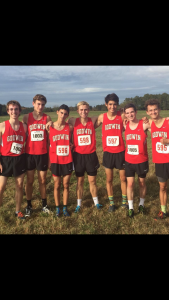 Season highlight: The Big Cat Invitational when Caroline and Johanna both broke the 20 minute

Wein, Emily Whitty, and Brittany Bell advanced to the regional meet.  Lupica made the All-

Coach’s quote: This year’s team had to climb a steep learning curve as there were only three

returning runners (graduation has decimated the team over the last two years).  We learned a

lot this year and show a lot of promise as there were no seniors on the team.

Finish: Lost in the second round of districts

Highlight of season: beating Freeman in the first round of the district tournament after losing to them twice in the regular season

Coach’s quote: “We improved immensely from the previous season and stood our ground in our conference.  I could not be more proud of each girl.  They all had great attitudes, mind sets, and work ethic,” said Mueller.

Player quote: “This season we overcame a lot of obstacles as a team, but no matter what we kept our heads high and supported each other,” said senior Abby Bostian.

Coach’s quote: “We see the girls working hard to improve their skills and scores and helping each other as a team.  As long as they work hard, do their best, and have fun, that is all we can ask for,” said Layne.

Player quote: “The team as a whole has already improved so much.  We have a lot of potential and I can’t wait to see what this season has in store for us,” said Reiter.

Player’s Quote: “All of our hard work will pay off this season,” said Brooks.

Coach’s Quote: “As a first year head coach I’m very excited to see what the future holds.  We have a few returning starters and a lot of young guys who are ready to step up and take on the challenge,” said Harris.

Player quote: “A lot of talent was lost after last season, but we still believe Eagles Swimming can reclaim the HCPS Championship this February,” said Appel.

Coach quote: I expect the girls to have the opportunity to compete for a conference title. They

are hungry and are working hard to accomplish their goals. We’re led by a strong contingent of

sprinters and jumpers. Some of which have an opportunity to compete for all-state accolades.

have an opportunity to compete well as a team.

Coach quote: The boys’ team will lean on the Distance team to earn the majority of their points at conference. The sprinters and throwers on the team are young, but talented. We look forward to setting personal bests each week and hope to see continuous improvement throughout the season.

Who are some key players you lost after last season – Ricky Lewis, Will Parcell

Coach Quote: “We have the ability to score a lot of points with our guards and finally have some big men who are actually big men.” -Thomas