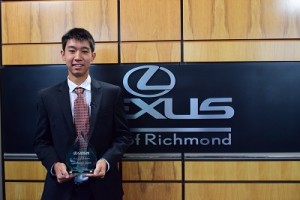 On Oct. 28, Godwin senior David Qin was nominated for the 2015-2016 Lexus of Richmond Pursuit of Perfection Leadership Award.

Lexus nominates a new student each week, and Qin was the week six nominee.

When choosing their nominees, Lexus looks for a scholar athlete; a student with good grades and success in a sport.

Qin was a captain and starter on the Godwin golf team this year and is ranked fifth in the senior class with a 5.02 GPA.

With the nomination, Qin is eligible for a ten thousand dollar scholarship later in the school year.  He also was given a trophy and a $100 gift card to Fleming’s Steakhouse.

Qin was on NewsRadio 1140 WRVA with Jimmy Barrett and Fox Sports 910 Richmond Radio with Wes McElroy.  He also appeared on Fox Richmond and did an interview in a Lexus SUV that appeared in a Lexus commercial.

“It was pretty crazy appearing on the radio and seeing myself on TV.  Not many people can say they have had those opportunities,” said Qin.

The full interviews can be seen on Lexus of Richmond’s YouTube channel.

“Receiving this nomination is a tremendous honor.  It is really nice to have all my hard work in the classroom and on the golf course recognized,” said Qin.