Justice Williams as 5A State Champ 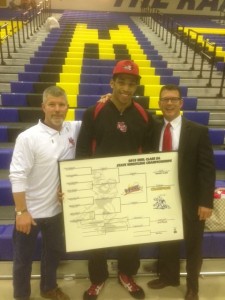 Senior Justice Williams has made history as the first Godwin wrestler to have won a 5A individual state championship. He won his match in the last period with a pin.

“I knew this was my final match for Godwin and I wanted to make it count,” said Williams. “When I realized that I was a state champion I thought that this was the last time I would wrestle for Godwin,” said Williams

In an interview with Godwin’s Daniel Morris around this time last year, when asked about his future with the Godwin wrestling team Williams said, “My goal is to become a state champion.”

This was a great accomplishment for Williams, but he put in a lot of hard work during the season going 49-1 as a Co-Captain. Nick Brunke said, “His leadership rubs off on people, he makes everyone around him better. A true captain.”

Also on his way to winning a state championship he managed to receive accolades like Central Virginia Challenge Champ, Toys for Tots Champ, Manchester Invitational Champ, and Conference champ.

Wrestler Junior Nick Brunke said, “Williams is one of the hardest working people I have ever met. His drive to be great is unmatched. I am glad to see that the hard work paid off for him.”

With Justices work ethic anything is possible for him in the future. The Godwin community is going to remember Justice as hard worker that went 110-27, a two time Conference champ, a three time regional placer, a 2 time state lacer, and above all else a state champion.

“I am going to miss wrestling for this school,” said Williams.