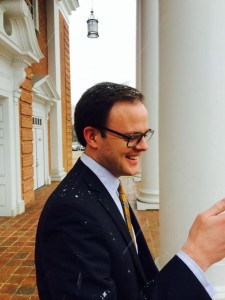 Jenks taking a “selfie” during the first snow.

Godwin students, along with the rest of Henrico County, were buzzing with excitement this past February as schools had nearly a week off because of snow.

What set apart this year’s snowfall from those in the past was the significant number of Henrico students sharing the topic on social media.

A trend that began during last years canceled exam week, students have been flocking to Twitter to express their snow-induced excitement.

Hundreds of students post clever tweets and pictures regarding the snow hoping to grab the attention of Henrico County’s Director of Communications, Andy Jenks.

Jenks serves as chief spokesperson for the school division, responding to all media inquiries. This includes calling homes to notify of a change in school scheduling and running the Henrico twitter account.

“One thing I do not do,” said Jenks, “is decide whether to close the schools.”

Tweets directed toward the Henrico Schools account during snow days usually consist of students asking Jenks to cancel school, which is a decision made by the Superintendent.

“I’m simply the guy who is responsible for communicating the message,” said Jenks.

The Twitter account was created in 2009, but it wasn’t until 2012 that it began being used to communicate closings.

“No one noticed it then,” Jenks said, noting that the account only had about 1,000 followers.

In December of 2013, because of a rare Virginia snow storm, the account became a county wide source of information, gaining thousands of followers almost overnight.

“I remember using it more for interaction at that point…responding to questions and addressing concerns,” said Jenks, “That’s when it really took off.”

Jenks responding to students launched the account off the ground. Students from all over the county wanted Jenks to reply to their posts, as if he was a celebrity.

Students began to post humorous pictures and tweets about the snow, and Jenks began to acknowledge their sarcasm and humor by responding back in a similar fashion.

Godwin Junior Conar Perry, an avid twitter user, remembers when the account rose to fame during the 2013 canceled exam week.

Perry remarked that the account wasn’t popular at all, that is until people began to tweet pictures of ice and snow covered roads to try and get school canceled.

As snow days came around in January and February, students continued the Twitter trend, boosting the account to over 19,000 followers.

“I love seeing students become interested in their school division,” said Jenks, “and if that means my head gets photoshopped onto Beyonce’s body, well, that’s a small price to pay.”

Jenks understands that the majority of tweets are all just part of the fun. However, Jenks still sees the occasional inappropriate post and chooses to ignore them, urging students to keep in mind their “digital footprint” for the future.

Jenks’ positive attitude towards the account can easily be attributed to its popularity.

Without Jenks’ sense of humor and willingness to interact with the students, the Henrico Schools twitter account would not be the phenomenon it has become.

The Henrico Schools Twitter account now serves as many students primary source regarding closings. It’s a quick and easy way for students to check for changes and communicate with the county.