Godwin Student Gretchen MacIIwaine has recently come out with her second album. Her first album was released in 2013 and since then she has been working on her new album called “Higher & Above.”

The album features seven original songs written by MacIlwaine herself. “I write my own songs as a way of letting go, but I really hope to co-write with some very talented people someday,” said MacIlwaine.

She records the songs at a studio called “Detached Sound” with producer Pedro Aida who has helped her over the past couple of years. When asked what her favorite song off of her albums were she said she had the most fun writing “Sunset Boulevard.”

She really enjoyed writing “Thank You” as well, because it was for her parents and she was able to use some of their past voicemails in the song.

MacIlwaine first started writing music in third grade. Ever since then, her love of music has grown tremendously.

She also knows how to play the guitar. The guitar playing in her songs is all done by her. “I only know a few cords but I’m hoping to learn more next school year,” said MacIlwaine.

She is scheduled to put out an EP this summer before she leaves for college in August. This album will contain only piano and voice. Dr. David Esleck will accompany her on her album.

“My main inspiration for my songs is honestly just experience. I’ve never really been able to get over things unless I write about them,” said MacIlwaine.

She first had the idea of putting her songs onto iTunes when she was a freshmen. She began to save up more and more money and as a sophomore was able to record some of her songs to put onto iTunes.

Through writing music she says that she feels more at peace and more secure with who she is today. “I am so blessed to have so many opportunities regarding music,” said MacIlwaine. “I continue to write because I feel musically fulfilled after I put everything I have into each song and it is one of the most important things in my life.”

MacIlwaine hopes to continue to write and develop in the aspect of music over the next couple of years. She has done so much and she does not plan to slow down anytime soon. 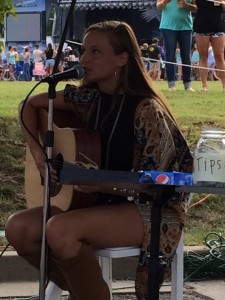 Gretchen MacIlwaine at one of her performances