Poetry Out Loud at Godwin

On Tuesday, Dec. 9, Godwin students competed for the title of the Godwin Poetry Out Loud winner.  Poetry Out Loud is a competition in which students choose a poem to memorize, and then recite it in front of a crowd and a board of judges.

At Godwin, there were 16 contestants.  Among those were the winner, senior Gus Beane, and the runner-up, junior Nicole Holberg.

“Gus and Nicole were head and shoulders superior to the others in that the spread between Nicole and the third-highest winner was almost 40 points,” said English teacher and judge Stephen Wozny.

Beane read the poems “The Promise” by Jane Hirshfield and “The Heaven of Animals” by James L. Dickey.  Holberg read the poems  “Her Kind” by Anne Sexton and “The Redeemer” by Siegfried Sassoon.  Beane scored 207 points for his reading and Holberg fell close behind with a score of 202.

In February, 2015 Beane will go to one of the ten Regional competitions in Va.

“We learned that the Regionals  are VERY competitive.  Gus [Beane] knows full well.  It’s difficult to know exactly what the judges are looking for, but one thing’s for sure: they want more than memory. 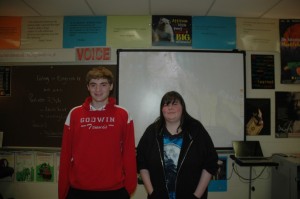