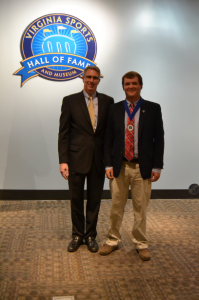 On the weekend of December 8 Mark Lawrence and three other athletes from Virginia were awarded Student Athlete of the Year Awards.

The 15 finalists were nominated by their coaches and administrators, then a committee consisting of Hall of Fame Inductees and board members select the four Student-Athletes of the year. Mark won it along with Emma Haupt from Virginia Beach, Sara Vigen from Reston, and Bryan Moon from Yorktown.

“I am really thankful for everyone who helped me get to this point. I was in great company receiving this award,” said Lawrence.