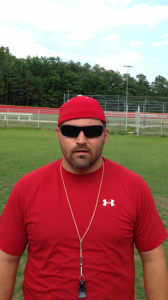 In his high school years, McPherson played for Fork Union Military Academy as a starting inside linebacker.  After graduating from high school, he went on to play football for Randolph Macon College.

In 2007, he began his first coaching position as Tucker’s head Junior Varsity coach.  After a year of coaching the JV level,   McPherson was promoted to the varsity level where he coached the inside linebackers and served as the special teams coordinator.

Now McPherson faces the pressure of replacing a head coach who took his team to the postseason a year ago and the challenge of losing last year’s starting quarterback, Preston Hutchinson. Hutchinson’s family is relocating to Ohio. The loss of another key player to transfer has also been rumored.

“Although [these players] are great athletes, and would be sorely missed, I am more concerned with focusing on the players who are here, rather than those who are leaving,” said McPherson.

The offense will likely look very different next year with many new faces, but because of McPherson’s experience as a defensive coordinator, McPherson will look to make many changes on the defensive side also.

“I can tell you for certain that we will look a bit different defensively,” said McPherson.

McPherson will look to change the team’s style of play, but he wants to prepare his players for what is ahead of them as well.

“My coaching philosophy is that football parallels life.  Football provides coaches a venue, with which we are able to educate our players on such values as work ethic, discipline, personal responsibility, and teamwork.”

“I am extremely excited for this opportunity, and I look forward to continued success here at Godwin,” said McPherson.