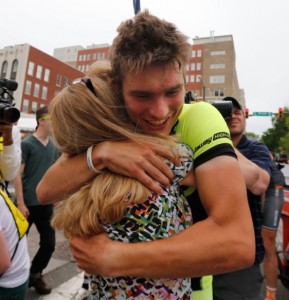 Article by: Will Johnson; J-1 correspondent

Sunday, May 4, VCU cyclist Chris Jones won the Collegiate Road Cycling National Championships’ Time Trial. “I was in shock when the announcer said I could start celebrating. It was unbelievable,” said Jones. But as Godwin teacher Susan Mitchell watched the first cyclist cross the line, she was by no means surprised by Jones having another victory. She knew that the resolve to succeed was a family trait.

Jones started his life by being a fighter, having to go on life-support for over a month due to complications from a premature birth. “Chris was so eager to start life he was born two months early,” said Mitchell. For Mitchell, his birth also marked her beginning as a single mom, who lost her job because of her boss saying she wasn’t able to perform her duties with Jones in intensive care.

She refused to let that get her down and it marked the beginning of her seeking any work she could find, eventually leading to her being hired at Godwin as a board sub ten years ago. Once at Godwin, she started working every extra hour she could, including Saturday detention, selling tickets at sporting events, and summer school.

When Jones went to college, he decided to pick up bicycling as a way to release energy. “He never had any intentions of it becoming anything serious,” said Mitchell, “But he quickly started riding for hours every day and joined the VCU team.” Any racing gear Jones couldn’t afford, he was able to borrow from other riders. He also received support from the Godwin teachers, including Penny Stevens who has been his “biggest fan” since the beginning.

But once again, in June 2013, adversity struck. Jones woke up one morning to find that his bike had been stolen from a friend’s apartment. The Godwin community rallied behind him and Godwin teacher Mary Bruner was able to help provide legal resources in finding and trying the accused. The perpetrator is currently a fugitive after fleeing on bail. “Restitution for the bike may never be seen, but I’m going to continue to work any extra hours needed to help support his education and cycling career.” said Mitchell.

“My mom is the reason I have been able to have a cycling career,” said Jones, “Cycling is a sport of sacrifice on and off the bike. She has always supported me throughout my cycling career.”

“I would like to spend some time as a pro cyclist in the United States,” said Jones in response to his plans for the future. But what of his plans after that?  He’s going to graduate school next year to become a teacher, just like his mom.