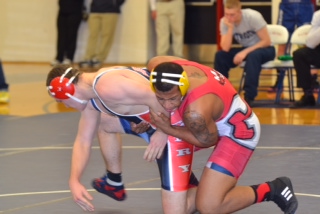 Williams competing for the conference title. 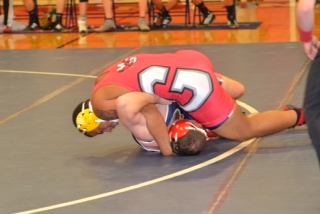 The Godwin Wrestling team claimed the Conference Title on Feb 8.

One of the individual champions for the Eagles was junior Justice Williams. Although he was behind early in the Conference Title match, Williams won the 220 pound weight class by pin.

“I knew I had to get the win for my team,” said Williams. Williams works hard during the wrestling season, but this offseason he spent plenty of time preparing for the upcoming year.

“Justice has a great chance to be successful if he just believes in himself. He has the speed, strength, and technique to win it all. He did a great job this offseason preparing himself by wrestling in a multitude of tournaments,” said Godwin Wrestling Coach Chris Harris.

Williams became a Cadet Freestyle State Champion and even competed against the nation’s best wrestlers in the Cadet Freestyle and Greco National Championship in Fargo, North Dakota during the offseason. There he narrowly missed out on becoming a National All-American in both styles by finishing one round away from placing.

“The mental aspect is where he needed to improve before the season began. I wanted him to have the attitude that he is the best every time he walks out on the mat to compete. Wrestling in Fargo this summer definitely has helped his mental approach. He knows he can compete against the best in the nation and you can see it in his confidence this season,” said Harris.

Other than winning conference titles, Williams helps the team in many other ways. Although he is a junior, he is one of the leaders on the team and provides an example for the younger wrestlers.

“Justice contributes a positive attitude on and off the mat,” said Harris. “He is one of the most liked wrestlers on the team. Our team is a very tight-knit group and Justice is a big part of why this team has great team chemistry.”

“Coach Harris is my biggest supporter on and off the mat. He believes in me even when I don’t believe in myself,” said Williams.

The next leg of Williams’ journey was the regional tournament on Feb. 15 and 16. There, he finished in third place in the 220 pound weight class, qualifying for the state championship.

In the state championship, Williams lost in the semi-final round. He placed fifth overall for the 220 pound weight class.

Williams, along with his teammate, sophomore Nico Rivera, was recognized as an All-State wrestler.

When asked about his future with the Godwin wrestling team next year, Williams said, “My goal is to become a state champion.”