On Saturday, Oct. 26 the Leukemia and Lymphoma Society held a Light the Night Walk in downtown Richmond. And in the walk, there were two teams from Godwin that walked in honor of Brenda Gradwell, a former Godwin guidance counselor. The Light the Night Walk is a 5k walk in which crowds of people walk in honor of someone they know who has, had, or passed away from leukemia or lymphoma.

Gradwell was diagnosed with leukemia back in June and the Godwin community banded together to create two teams to walk in Gradwell’s honor.

“I am so appreciative about the Godwin participation in the walk,” said Gradwell.  Gradwell is back at MCV in the bone marrow transplant unit and hopes to be released within five weeks if all goes well.

Reynolds’ business, Li’l Shoppe of Cards, at John Rolfe Shopping Center, partnered with Team Brenda to collect the donations and raised 157% of their goal of $1000.  Reynolds’ store has teamed up with the Godwin community in the past for fundraising and charitable events.

Between forty to fifty people walked in honor of Gradwell.  “It was a wonderful walk. It took us about an hour, through the Fan of Richmond, because we raised a large amount of money we were all given a t-shirt and lighted balloons,” said Dunavant.

“There was quite a substantial crowd walking through the Museum District and Carytown with red, white, and gold balloons that had lights in them. The overall experience was wonderful and I would encourage others to do the walk next year,” said Reynolds. 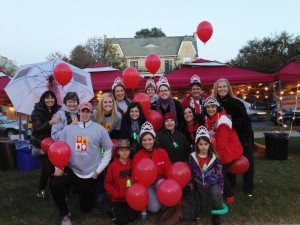