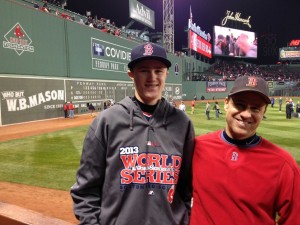 Scott Merritt (l) and his dad (r) at Fenway Park during game six of the world series.

Merritt left after school Tuesday and drove to New Jersey, where he stayed the night.  He then left for Boston the following morning.

Merritt’s dad has a friend who works for the MLB in the commissioner’s office.  He was able to sell tickets to the Merritts.

“It was something that I will remember for the rest of my life and it seemed extra special for them to celebrate it in Boston after the bombings back in April,” said Merritt.